Fishing Cormorants Await Their Turn on the Lake

Recently, while having a late lunch one afternoon in Old Town Dali, Sarah and I started up a conversation with a couple of guys enjoying a few beers at an adjacent table. One of them was an expat American living in China and the other was a local cormorant fisherman enjoying the afternoon with his client after a morning on nearby Lake Erhai. They were good conversationalists and their description of, and enthusiasm for cormorant fishing was infectious.

I was not aware that there was cormorant fishing in this part of China. I had always been fascinated by the concept of people using cormorants to help them catch fish and after a few minutes of talking about it, I was dying to go witness this ancient practice. Before I knew it I was handing over a deposit to our new Chinese Bai friend “Alfie” with nothing more than a handshake and an agreement to meet the next morning at the gates to the old city. 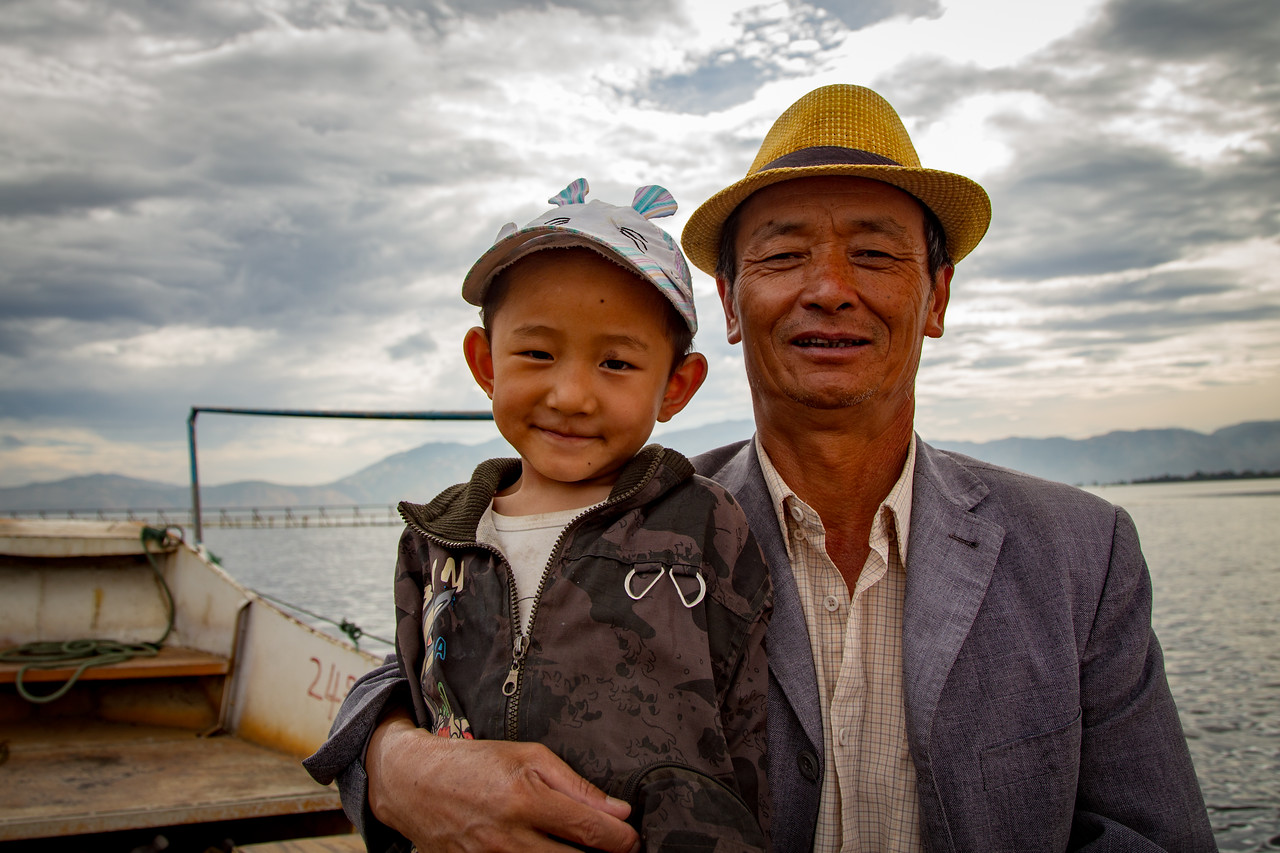 Our Cormorant Fishing Guides Alfie and His Grandson Kai

In case your haven’t heard of it, cormorant fishing is a traditional fishing method used primarily in Asia, where trained birds, cormorants, are used to dive into lakes and rivers to retrieve fish and bring them back to the fisherman. To keep the cormorants from swallowing the catch a snare is tied around the base of the bird’s throat. This allows the birds to swallow smaller fish, but they have to return larger fish to the fishermen. The techniques used in cormorant fishing have been handed down from generation to generation back to at least to the 10th Century, but in the modern world most cormorant fishing is performed for tourists and the practice is starting to die out.

As promised, Alfie met us right on time at the gate. He had also brought along his shy six-year-old grandson “Kai”. Upon arrival at the lake, our hearts sank a little when we saw many large white rowboats and a few giant tour busses near the embarkation point. The disappointment was short lived, however, as Alfie led us around the crowds and took us to our own private boat. We were given life jackets, boarded the sturdy little wooden craft and our oarsman (a man who I swear looked a little bit like Elvis) began to row us onto the lake. 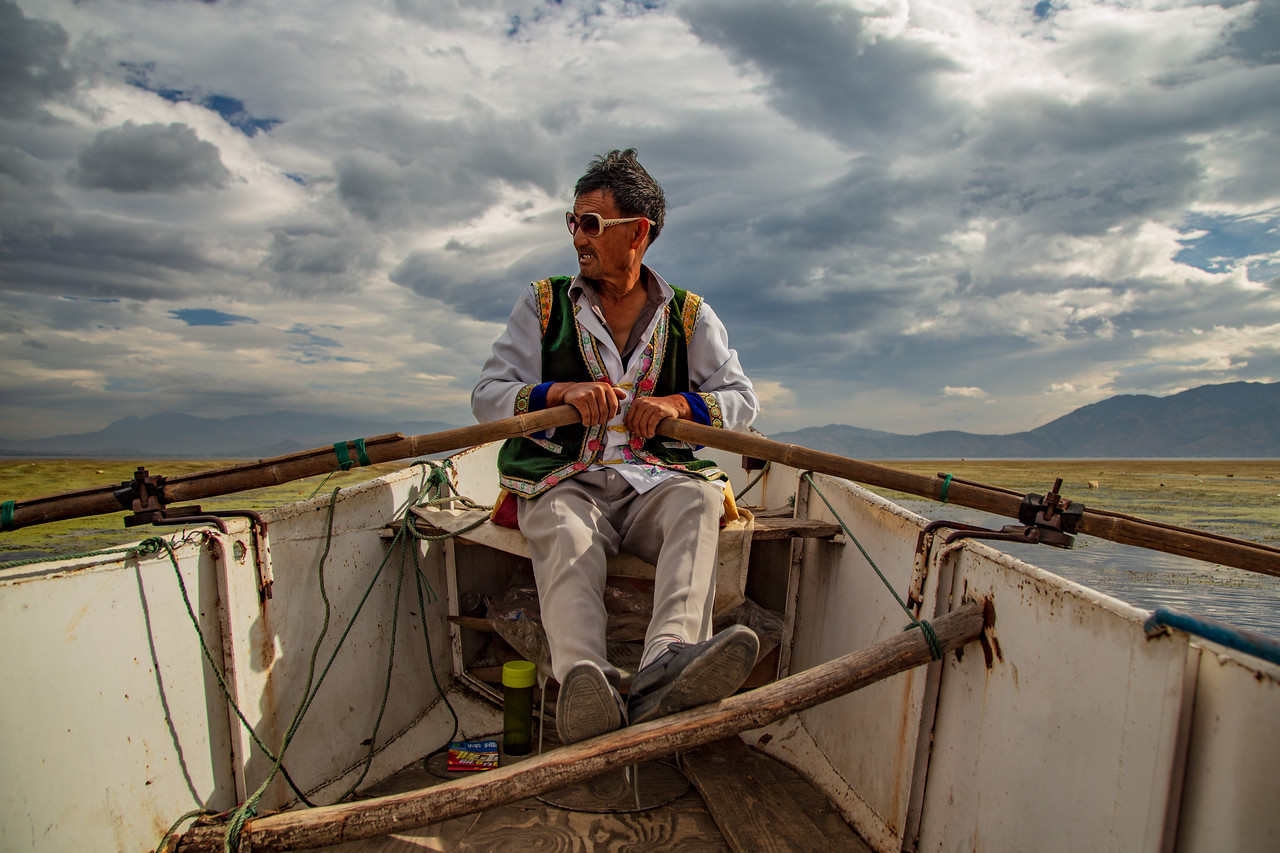 It was beautiful. The still waters reflected low clouds that hung over the nearby mountains. The air was crisp and cool and the pleasant rhythm of square wooden paddles cutting through water leant a serene feel to the scene. As we moved along Alfie pointed things out to Kai and they teased each other in a close, familial way. It was poignant and a bit sad because you knew that after centuries of passing down the family trade, that Kai would never learn the ways of his ancestors.

After about fifteen minutes of rowing we saw a boat with a man and a woman onboard and about a dozen cormorants sitting on the gunwale. The birds seemed to get excited as we approached and as if on a queue from one of the fishermen leaped into the water. They seemed actually seemed to be enjoying themselves as they thrashed around and retrieved bits of chum that had been thrown into the lake for them. 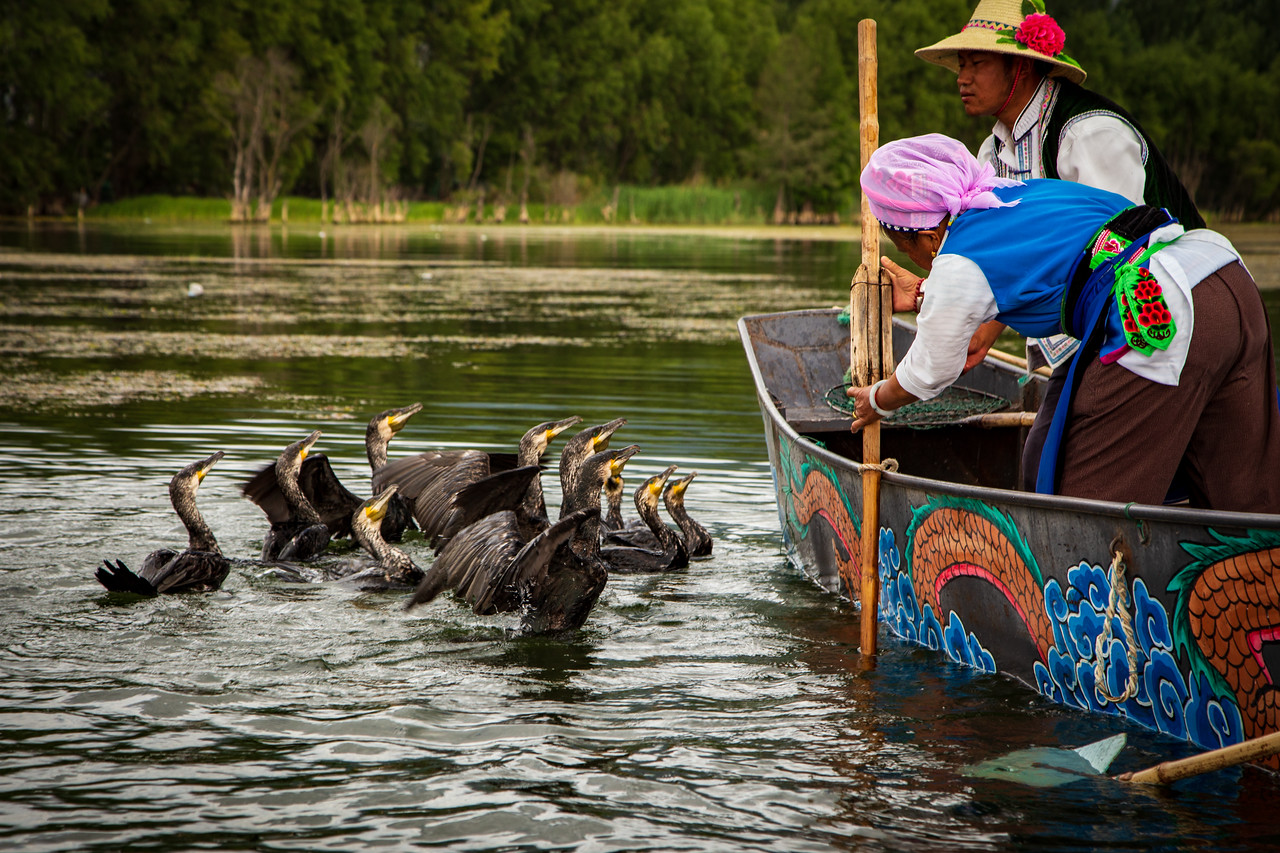 Fishing Cormorants Lining Up for Fish on Lake Erhai, China

Okay, it didn’t take long to realize that what we were witnessing was more of a show than actual cormorant fishing. Nonetheless, it was an interesting display of the ancient techniques and we got a good idea of what the practice used to be like. It was interesting to see the enthusiasm with which the birds went about their tasks. They would vigorously hold onto fish provided by the fishermen, some much too large for them to swallow, and dive after them if they dropped into the lake. They also would gather alongside the boat, reminiscent of ducks at feeding time, and dive deep into the water to retrieve the bits of fish that were being thrown to them. It was funny to watch.

After the demonstration the fishermen rowed close our boat and allowed us to hold some of the cormorants. I stretched out my arms and found they were quite heavy when placed on my hands. While looking at them up close I could see that these birds didn’t have snares on their throats and could actually fly away if they chose to. The whole thing may have been a bit contrived, but we were enjoying being around and handling these beautiful creatures.

As much fun as it was we knew it was time to leave when we saw other boats, filled to the brim with tourists, rowing our way. We left the birds and our boatman rowed us away toward a large barge with several women, dressed in traditional Bai clothing, milling about on deck. The serenity of the lake was shattered as someone switched on a giant sound system and the women began dancing and singing and for our “entertainment”. After the beauty and serenity of being with the birds, it was almost surreal to encounter something so out of place and gaudy.

Luckily the “entertainment” didn’t last long and we returned to shore. Alfie showed us around the areas where the cormorants are kept and the chicks are raised. It was clean and there appeared to be enough space so that the birds weren’t too crowded. There were even a few cute baby cormorants, maybe a foot tall, out on the quay playing with each other in the way that all species seem to enjoy. 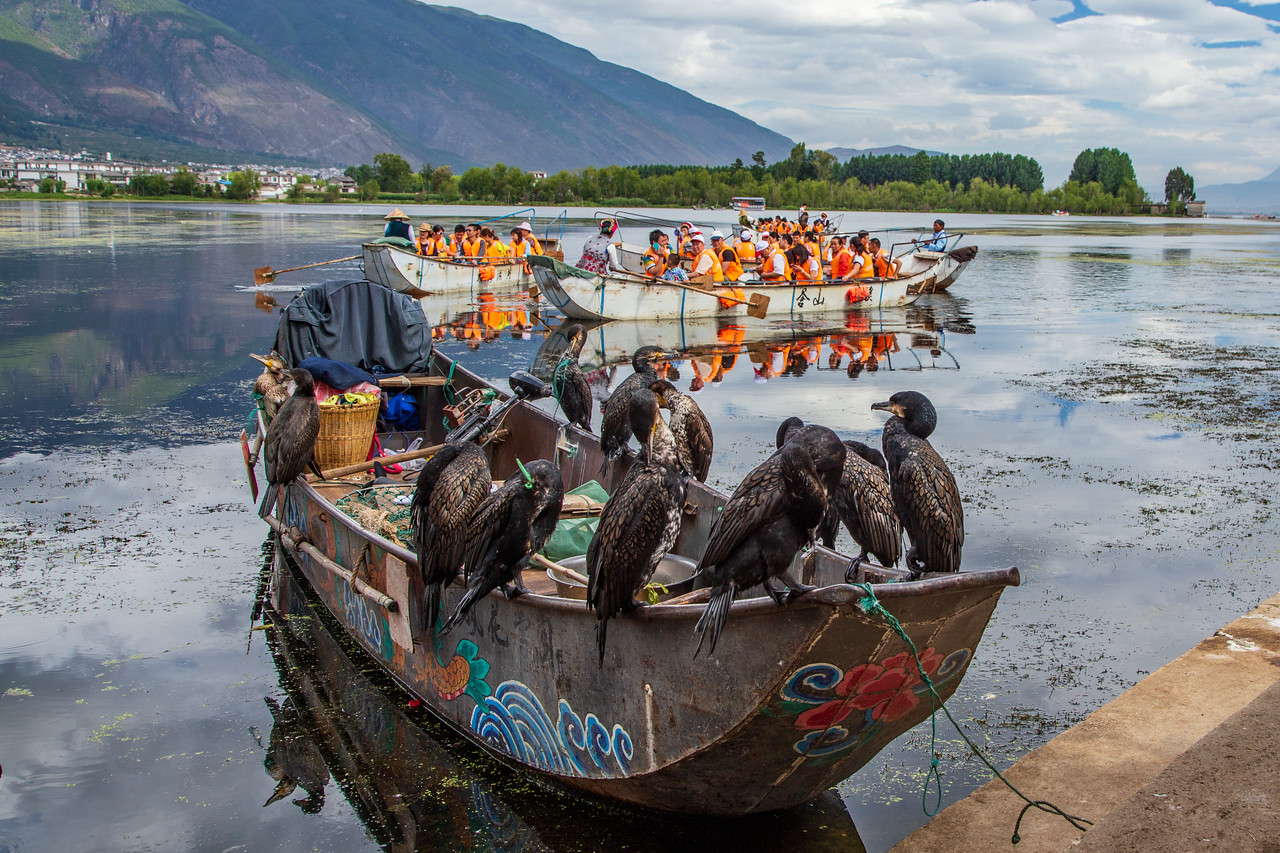 Crowds of Tourists to See the Fishing Cormorants, on Lake Erhai in China

I am sure some people see the prospect of using these magnificent birds for fishing, or in this case entertaining people, as somehow cruel. What I witnessed appeared to be a mutually beneficial relationship between man and beast. These birds are hand-raised from chicks and as a consequence have strongly bonded with their handlers. The fishermen ensure the birds are fed, protected from predators and kept healthily. It is also a good sign that captive fishing cormorants live longer than their wild counterparts. I am no expert, but they seemed to enjoy performing and the human interaction. They certainly seemed happier than caged birds. While the days of Chinese fishermen feeding their families by using fishing cormorants are almost over, this was an interesting and beautiful insight to a time that has past.