Driving Through Chiapas Mexico (Part One)

Driving through Mexico in Chiapas (Part One)

On a map, Mexico Highway 199 looks pretty tame. It is designated as a two-lane, sometimes four, paved, relatively direct road up the Sierra Madre de Chiapas mountain range beginning in the jungles near Palenque to the cloud-shrouded pine forests near San Cristóbal de las Casas; a rise of nearly 7,000 feet.

While planning our trip to San Cristobal we heard tales of cars sliding into chasms off of the winding road, mudslides, huge falling boulders, crazy bus drivers and perhaps most disconcerting of all – Zapatistas. We may be retired but we are definitely still up for an adventure so we just decided to shrug it all off and see for ourselves.

Mexico Highway 199 roughly follows the beautiful Rio Tulija and has a number of waterfalls located along its winding path. Near Palenque, the climate is warm and humid. There are forests of palm trees and thousands of butterflies in the air. Men with machetes labor daily to keep the jungle from reclaiming the road.

In remote places, you can hear Howler Monkeys crying out to each other across vast, steamy distances. At this point Highway 199 is relatively straight and wide. There are also numerous villages lining the road offering everything for sale from colorful handmade dresses to drinks of chilled coconut water.

Guidebooks describe the first waterfall we came to, Cascada de Misol-Há as a “beautiful one, falling some 30 meters from an overhanging semicircular cliff down into a broad shimmering pool.” Cooling off in the “gorgeous sight” that is “fantastic for swimming” sounded wonderful after spending our morning exploring the spectacular Mayan ruins at Palenque.

Well, I guess the guidebook had been written in the dry season. Misol-Há was a torrent. Brown turbulent water filled with trees that had been ripped from the rivers banks exploded off of the one hundred foot cliff and crashed into the pool below. A soaking mist filled that air creating numerous rainbows in the jungley air. The flow was so fast and so loud we had to scream just to communicate. It was fun. It was refreshing but it definitely wasn’t a place to go swimming on that day.

After changing clothes in the car we got back onto the Highway 199. It was starting to become a bit more winding and a little steeper. As we gained elevation the air began to cool and the palm forests and jungle starting giving way to more open spaces. It wasn’t long before everything had a different feel. It was kind of subtle and indescribable but we were obviously moving to a different place – Zapatista Country 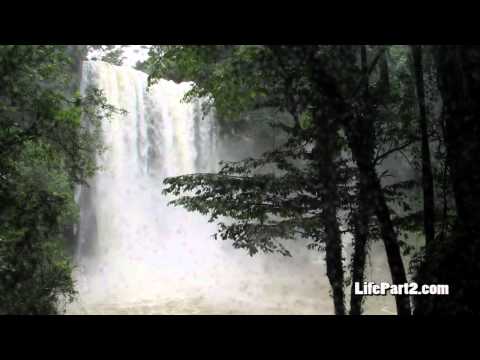