How We Discovered Xcalak, Mexico 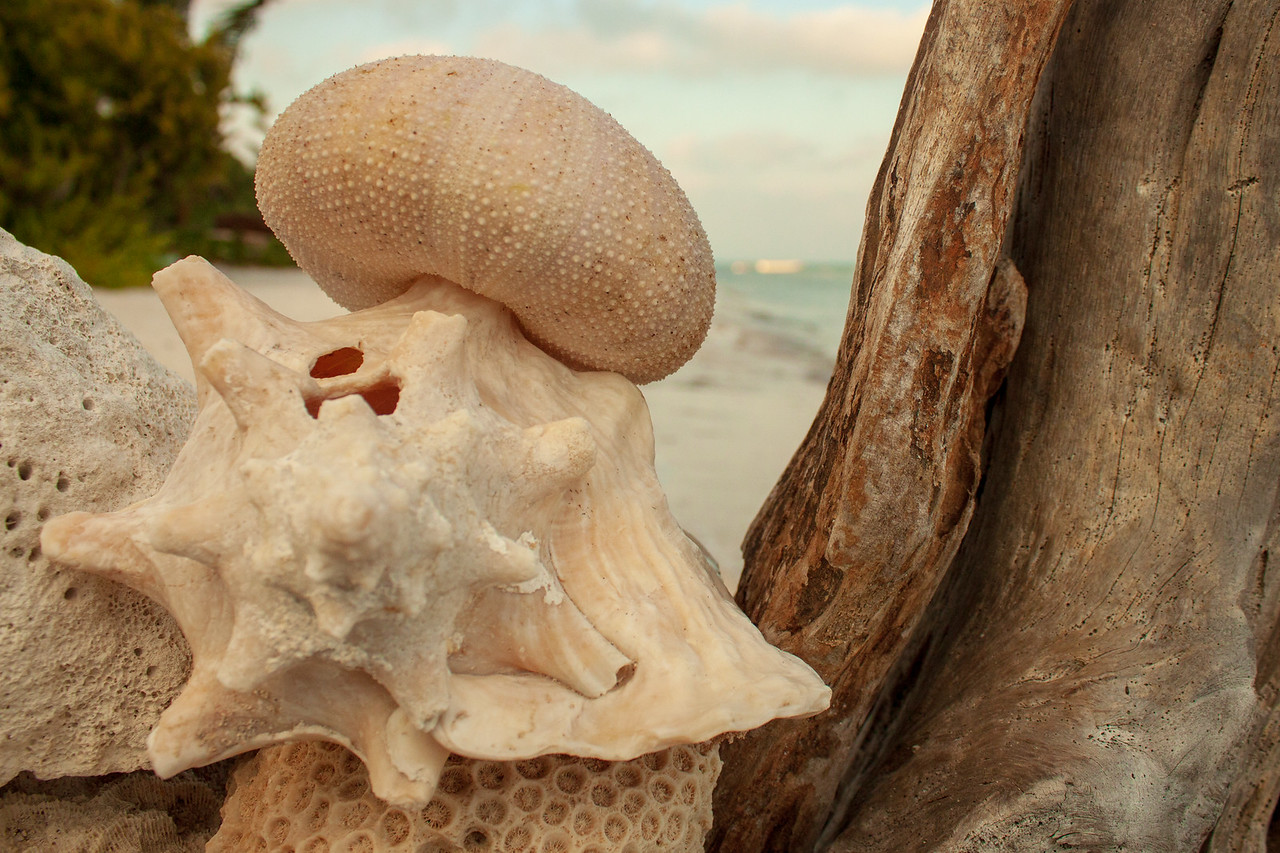 Sculpting Shells on the Beach in Xcalak, Mexico

A New Beginning in Mexico?

It has been a little over a year since we have been to Mexico. It was only 14 short months ago that we were visiting on another of our trips, looking for a location to begin a new phase of life; a place to change directions. A place that was unique and authentic. We wanted to find someplace where the people weren’t simply living to outdo their neighbors but living simply and enjoying quality lives.  A place where people placed more importance on improving themselves rather than improving their bank accounts. We wanted a quiet place where we could move to the rhythm of life rather than the relentless clicking of clocks. We knew what we wanted but we had no idea how Xcalak, this little fishing village on the edge of what some consider nowhere, would motivate us to take the leap.

How We Discovered Xcalak

Xcalak, the southernmost village on one of the last “unspoiled” stretches of Mexican Caribbean at the end of the Costa Maya. Although we are both fairly adventurous travelers, admittedly we were a bit concerned about driving from Playa del Carmen to Xcalak on what were for us, unfamiliar roads. When we saw the car rental kiosk, nothing really more than a podium at Señor Frog’s next to the ferry dock, we were feeling a little more apprehensive. Our apprehension rose a bit more when we saw the actual vehicle, a tiny three-cylinder late model silver Chevrolet hatchback. After completing the typical paperwork we took the keys and headed out. Concerned that our car had enough horsepower to traverse what we expected to be the Mexican equivalent of the Australian Outback we negotiated our way around back streets and traffic circles guided only by reassuringly familiar colored and geometrically shaped signs and a vague sense of where south was. However, in only a few short minutes we had stumbled upon the beautifully paved four-lane highway that was to take us toward our destination. 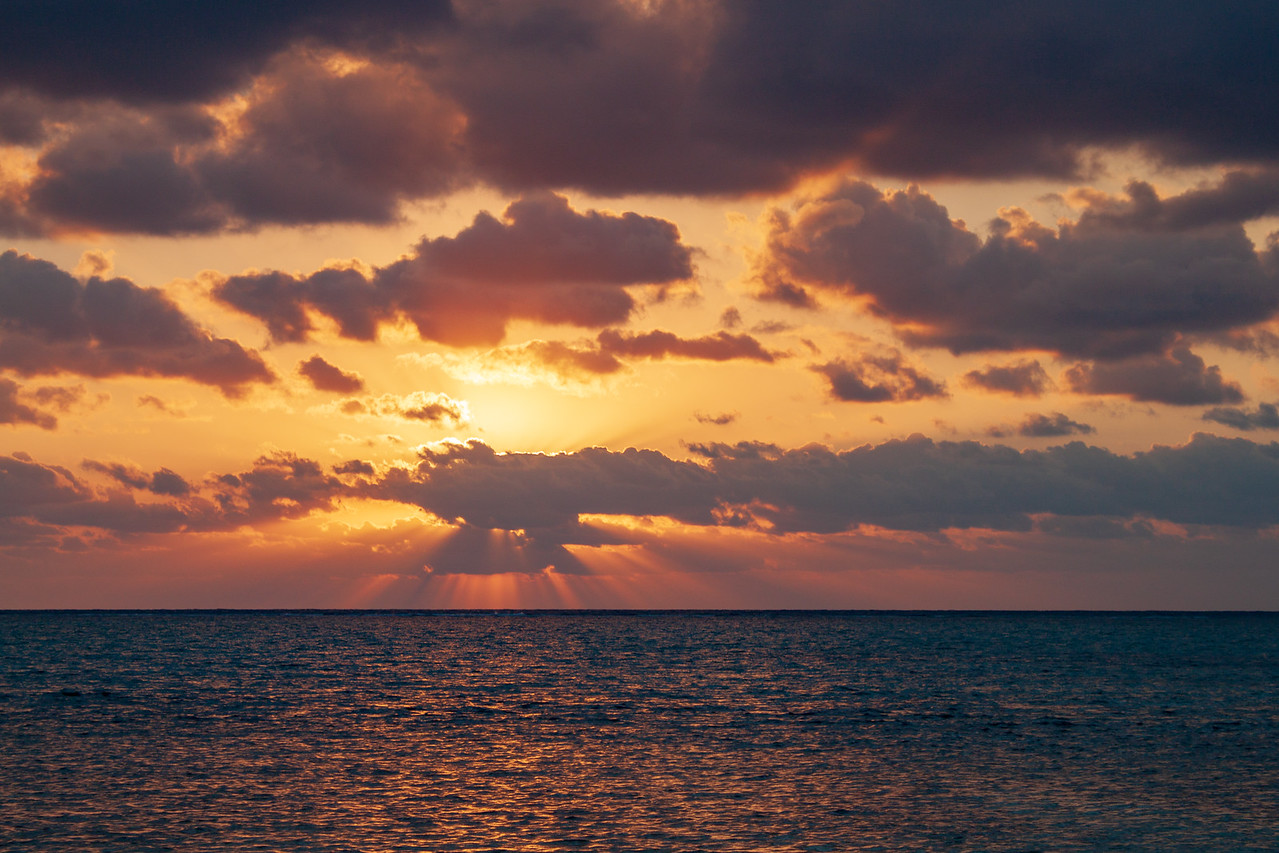 The day was sunny and warm so we eschewed the air conditioner and rolled down the windows to soak in the atmosphere. We were on the road; we had palm trees, tropical breezes and big smiles on our faces. Everything was going great but we still had things to do. Knowing that we were going to be self-catering we had to find groceries on our way south. We didn’t know exactly what our grocery shopping options were going to be but we decided to find something along the way. Naively thinking we might have to stock up at roadside stands or convenience stores we came upon the Chedraui Supermarket before we even got to the outskirts of Playa del Carmen. Chedraui is a huge modern grocery store with wide aisles, bright lights and well-stocked shelves. Like many of the larger grocery stores in the United States, there was a bakery, a meat market and a deli. Really the only difference between Chedraui and the big box American chain grocery stores back home was the somewhat lower prices. Because neither of us I have yet learned Spanish we had to do a bit of improvisation to get what we needed. By using pictures on labels we were able to find the staples. We got our deli and bakery orders by smiling, pointing at what we wanted and measuring quantity with our fingers. Everyone in the store was friendly and good-natured. It probably helped that whenever we needed assistance we smiled and said, “por favor” and “gracias” a lot. By being friendly we were guided in our selections and helped with our Spanish. It is not every day that you get foreign language lessons and a cart full of groceries at the same time. What could have been an ordeal turned out to be a mini-adventure facilitated only by smiles and a positive attitude?

We didn’t linger because we needed to get going. Xcalak was still almost three hours away and we didn’t want to be on the “scary” road after dark. In the United States, you often hear sensationalized stories of “banditos” being out on Mexican roads after dark and even though what we were seeing in daylight didn’t fit with what we were told was dangerous; we still wanted to be cautious, not that we could outrun anyone in a three-cylinder car. We hurried south along Highway 307; we bought some incredibly sweet and juicy pineapples in Limones, topped off the gas tank at the junction near Majahual and arrived at Xcalak just as the sun was setting. There were families out and about, teenagers were kicking an old ball on the soccer fields and young children were chasing each other on the otherwise quiet streets. I could almost feel a buzz as the tension drained from my body. We later learned that most people don’t drive on the roads down here after dark not because of “banditos” but because of unfenced cattle and the wildlife moving to the road to stay warm. We took a deep breath and a few minutes to just sit in the car and watch the scene. It was twilight as we drove down the unpaved but well-kept beach road to our rental house. Any concerns that we had about an underpowered car were totally unfounded. We arrived to a cool breeze and the sounds of the surf. The air was clean and tinged with the wonderful aroma of salt and sea. 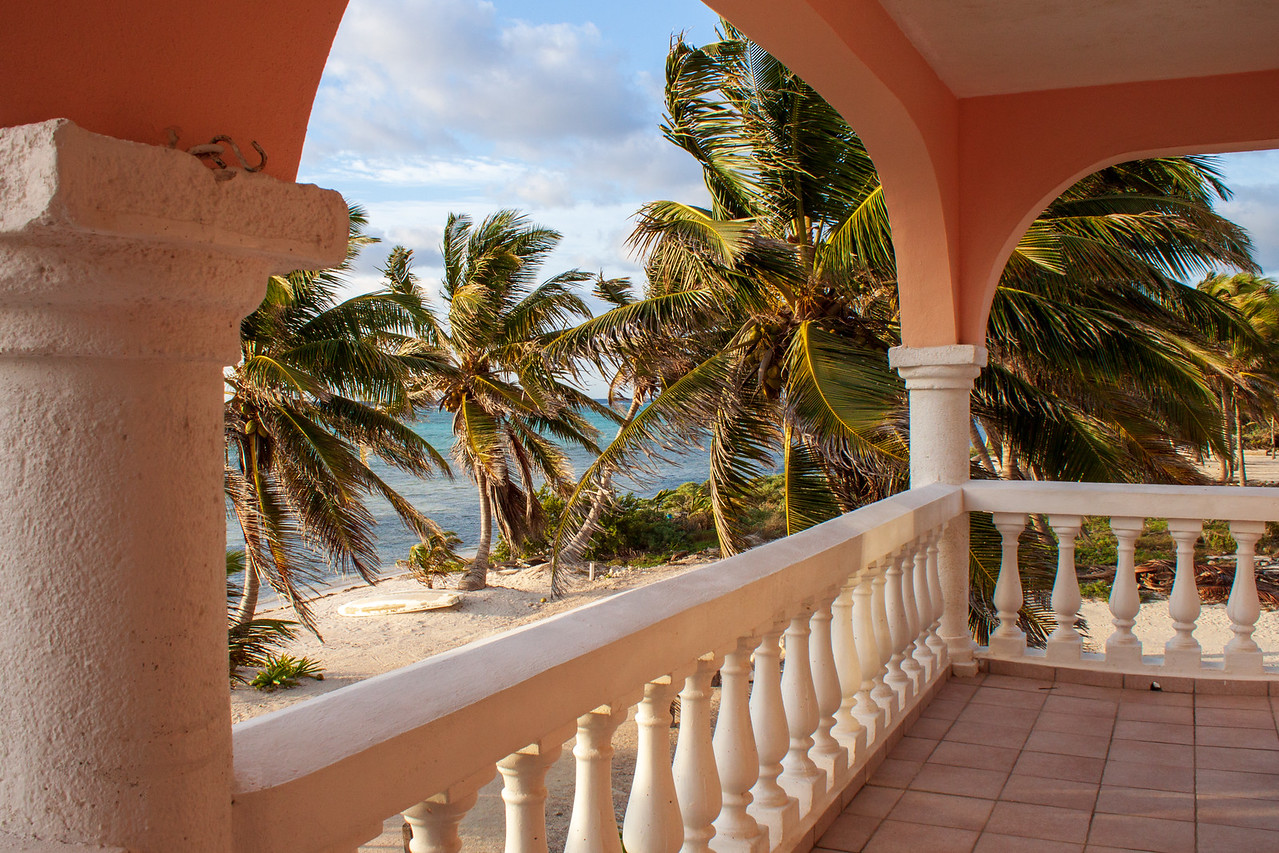 View from the Deck of Our Rental in Xcalak

We left our suitcases just inside the door, grabbed a bottle of Shiraz that we had bought at Chedraui and rushed up to the roof to soak in the night sky. We just laid there holding hands on chaise lounges staring at the stars and reflecting on the day. It was now pitch black and moonless. The stars looked so close it felt as if you could reach out and touch them. It was so quiet you could almost hear the movement of the planets. We hadn’t even seen the place in full sunlight but it was already beginning to feel strangely familiar. Kind of like a step back to the days before we got too swept up in the frenetic pace of the modern world. In the early morning, the sun greeted us by rising over the sea and streaming in through the open windows.

A warm breeze moved the curtains and infused the room with the sweet fragrance of frangipani. Although we were anxious to explore we resisted the temptation for a few minutes and just laid there listening to the day begin. There were no mechanical sounds whatsoever. There was only the breeze rustling the palm trees, birds singing and the sound of the ocean. Our house was off the grid. One of the complications of being off the grid is that solar energy systems can’t handle appliances with heating elements in them.  This necessitated that our morning coffee ritual would begin with a kettle heated on the propane stove followed by brewing in a French Press.  Although we had seen French Press coffee makers used other places we had never been required to operate one ourselves.  After a few minutes of fumbling with the parts, we managed to figure it out and make a respectable, well actually quite extraordinary, cup of coffee. With bagels toasted under the broiler and a bowl of fresh fruit, we put together quite a respectable breakfast.

Learning to Use a French Press

Less than fifty yards from our front door was the Parque Nacional Arrecifes de Xcalak or in Ingles, Xcalak National Reef Park. The park is part of the world’s second largest barrier reef and is known to contain some of the best snorkelling on the planet. We couldn’t wait to get into our swimsuits and go discover what natural treasures lay just offshore and we were not disappointed. Dozens of species of coral and hundreds of species of fish schooled in shallow crystal clear waters. It was quite spectacular and we were the only people around. We swam until we were exhausted then took a long siesta in hammocks on the beach.And so it went. We rode bicycles, we snorkelled, we walked on the beach and we took time out for each other. Around, every corner was a new discovery. There was no rushing. People seemed more interested in savouring time; not making it pass. Everyone we met was friendly and helpful. People would see us as new faces and engage us in long unhurried conversations. Remarkably, we felt that they were genuinely interested in getting to know us; not sizing us up trying to figure out our rung on the social ladder. People seemed to treat others with respect and dignity. Everyone acknowledged each other and mixed together comfortably. Unfortunately, eventually, we had to go.

Often when you visit places, you know, odds are that you will not return. We didn’t have that feeling this time. We knew we had found what would be, for a year anyway; home. In the time since we have left, we have started drastically downsizing. We have given notice at work and put our home on the market. We are examining what it is that we really need and paring down to what is for us – mostly – bare essentials. If it won’t fit in the car, it isn’t going. We are moving to Xcalak. PS – Rumor has it that next year is going to be an exciting time in Mexico and on the Mayan Riviera. We have been told that the Mayan calendar is winding down and there is going to be a series of concerts and other events to celebrate it. Now I’m not sure about the end of the world or the metaphysical aspects of calendar expiration but it seems like an excellent opportunity for a party. If you haven’t seen Mexico lately maybe you should get there soon because according to the Mayans; time is literally running out! We will keep you posted.