Some of My Best Pictures of India

My Dream to Make Pictures of India

I dreamt about India. From the time I arrived in Asia, a trip to India was something I pined for. Sensual, crowded, intense, aromatic, frenetic, picturesque and bright, are just a few of the adjectives I have heard fellow travelers use to describe it. I read novels, watched movies and stared endlessly at maps of India with a sense of wonder and, quite honestly, a feeling of bewilderment about how one approaches a place of such mystery and diversity.

India is an enigma. It holds some of the planet’s oldest civilizations yet hosts some of the world’s most advanced technological centers. Nature lovers want to explore India’s national parks and seashores, corporations want to do business here, and people in search of clarity hunt for enlightenment in India’s ashrams.

I wanted to go make beautiful pictures of India, but because I was bewildered by the number of possibilities that India offered, I elected to join forces with “On the Go Tours” and have them deliver me to some of the places I thirsted to discover. Founded in 1998, U.K. based On the Go has grown from a chance encounter of the two founders in Egypt, to become a global force in the travel industry. From modest beginnings taking budget travelers to the Middle East, On the Go Tours now offers structured and bespoke tours to adventurers of all ages to over 60 countries. Their philosophy is that an adventure is more comfortable with a chilled beer and a comfortable room waiting for you at the end of the day. I can get onboard with that! I wanted to make the best pictures of India possible, so I joined up!

Pedicabs are practical in Delhi, India and still in wide use

The “Highway to the Himalayas” tour began in Delhi, India and over the course of 18 days ended in Kathmandu, Nepal.  Along the way, we saw some of the Asia’s most legendary shrines, historic palaces, fabled forts, and holiest of temples, all the while traveling through some of the world’s most spectacular scenery. Our itinerary covered all of the places I craved to experience and added a generous dose of intriguing stopovers that I hadn’t considered before.

How many kids can you get in a pedicab?

I had arrived in Delhi a few days before the tour began to get acclimatized and get a feel for India. I avoided the places we would see on tour and threw myself into the neighborhoods. With over 25 million inhabitants, all seeming to be on the move at the same time, Delhi can feel a bit overwhelming. It is a city, in places, scattered with high rises, broad avenues, shopping malls and luxury goods dealers. In other places, it is dusty lanes crowded with “holy cows,” cardboard shacks, beggars, and touts. I loved the frenetic pace of Delhi, but I have to admit, after three days of navigating around Delhi on my own, it was nice to crawl into the comfort of the tour.

Following are just a few of the highlights, with photos, from the Indian portion of my “Highway to the Himalayas” tour:

Call to Prayer outside of India’s largest mosque, Jama Masjid

One of the things that most impressed me about India was the number of religions present and how well they all seemed to coexist. There are places in Delhi where you can stand and see a Buddhist temple, next to an Islamic mosque, next to a Christian church next to a Hindu temple. At the 17th mosque, Jama Masjid, the largest mosque in India, worshipers face west towards Mecca during the daily call to prayer. The courtyard at the mosque is large enough to accommodate more than 25,000 persons.

The Red Fort in Delhi, India

Behind the massive sandstone walls of the Red Fort in Delhi was the former residence of Mughal emperors for nearly two centuries. It was constructed in 1648 by the fifth Mughal Emperor Shah Jahan, (better known as the builder of the Taj Mahal) and is still an important ceremonial place for the government of India. This was the first place we visited that impressed upon me how significant and important the Mughal Empire was in the history of the world. Its thick walls replete with fine detail clearly spoke of the skill of the craftsman who constructed this masterpiece over four centuries ago. It was designated a UNESCO World Heritage Site in 2007.

The Persian elements, combined with the Mughal architecture of Humayun’s tomb is another reminder of how long India has been at the crossroads of human civilization. It was one of the first garden mausoleums in India, and it appears almost to be floating on a sea of green. It is historic also in it is the place where the last Mughal emperor, Bahadur Shah Zafir, took refuge before being exiled by the British in 1857. It was fully restored in 2013. 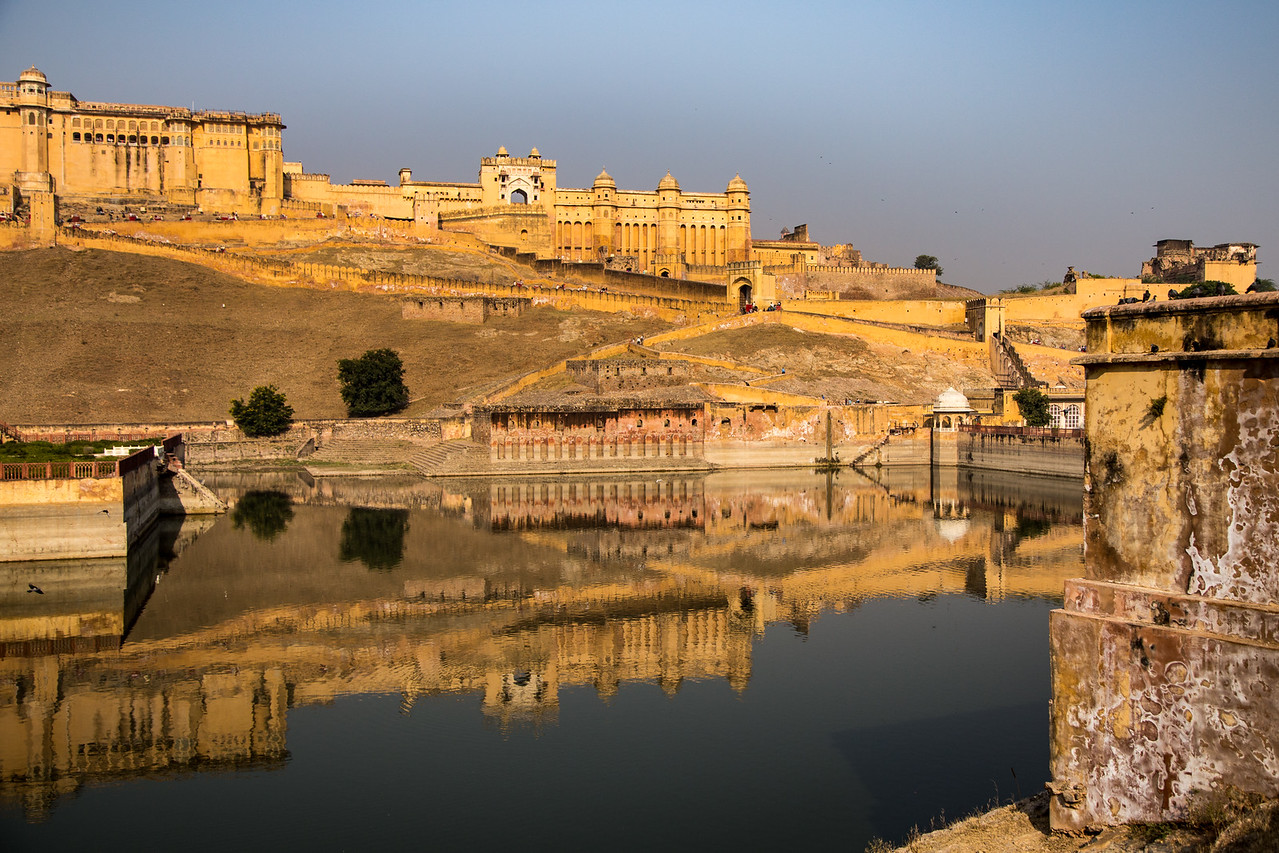 From Delhi, we traveled via bus to the city of Jaipur. Out of all of the places that we visited, I found Jaipur the one that had that particular feeling you sometimes get of, “I could live here.” We visited many sights including the residence of the current, 17-year-old, Maharaja, and a marvel of 18th-century science and engineering the Jantar Mantar monument, a sundial that is accurate within two seconds. But to me, the most impressive sight in Jaipur is the sprawling Amber Fort. 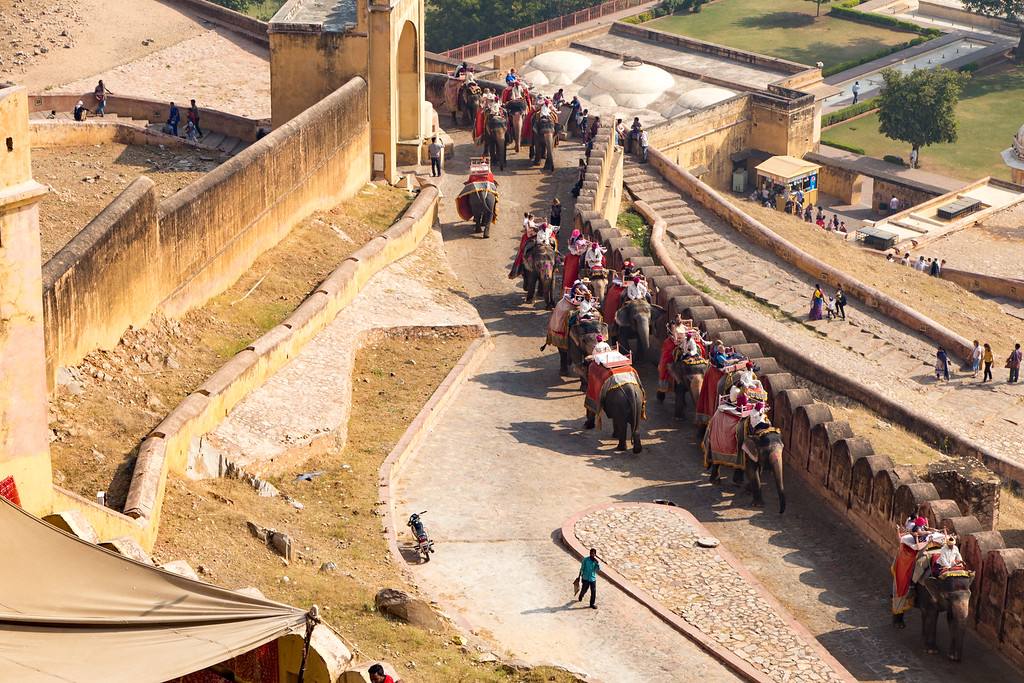 Elephants Take Tourists to the Top of the Amber Fort

Unfortunately, there are still people that, even after learning of the damage it does to the animals, still insist on riding elephants for tourism. “On the Go Tours” has stopped offering this option in Jaipur and instead had a small fleet of Jeeps waiting to take us to the top. Riding Jeeps was not only more eco-friendly, judging from the miserable looks on the faces of those on elephants being schlepped to the top, more fun! 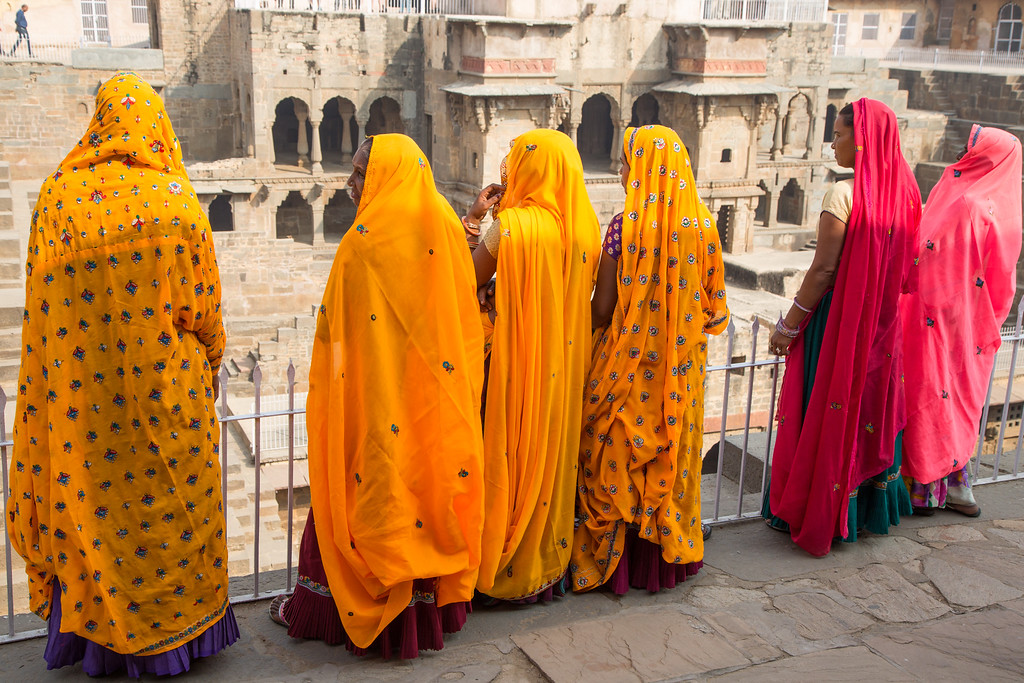 Women in Their Colorful Dress at the Abhaneri Stepwells

Color is everywhere in India and sometimes in the most unexpected places. Women toiling in the fields as well as the market sellers in Rajasthan all seemed to wear this amazingly colorful clothing. The women visiting the Abhaneri Stepwells, were no exception. Built in the 8th-century, the “Chand Baori” Step Well consists of 3,500 small steps that descend over 13 stories deep. The incredible architecture, as well as the scenes here of rural India, are things that make you just want to linger. 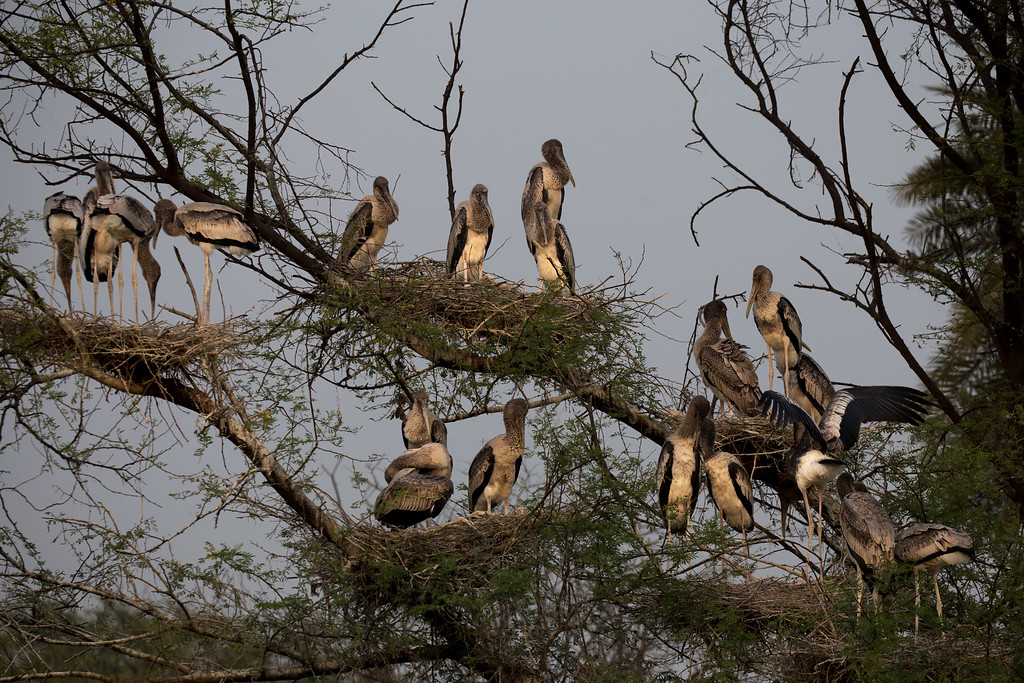 Some of the best pictures of India are of its wildlife and nesting storks were just one of the natural wonders we got to experience, all from the comfort of our rickshaws, in Keoladeo Ghana National Park. Parakeets, spoonbills, egrets, kingfishers, sandpipers and ibis were all there to greet us during our sunset visit to the park. We also saw some mammals including deer and wild boar. India is such a populous place; it is good to know that there are protected areas and there is a growing awareness of how precious and fragile the ecosystem is. 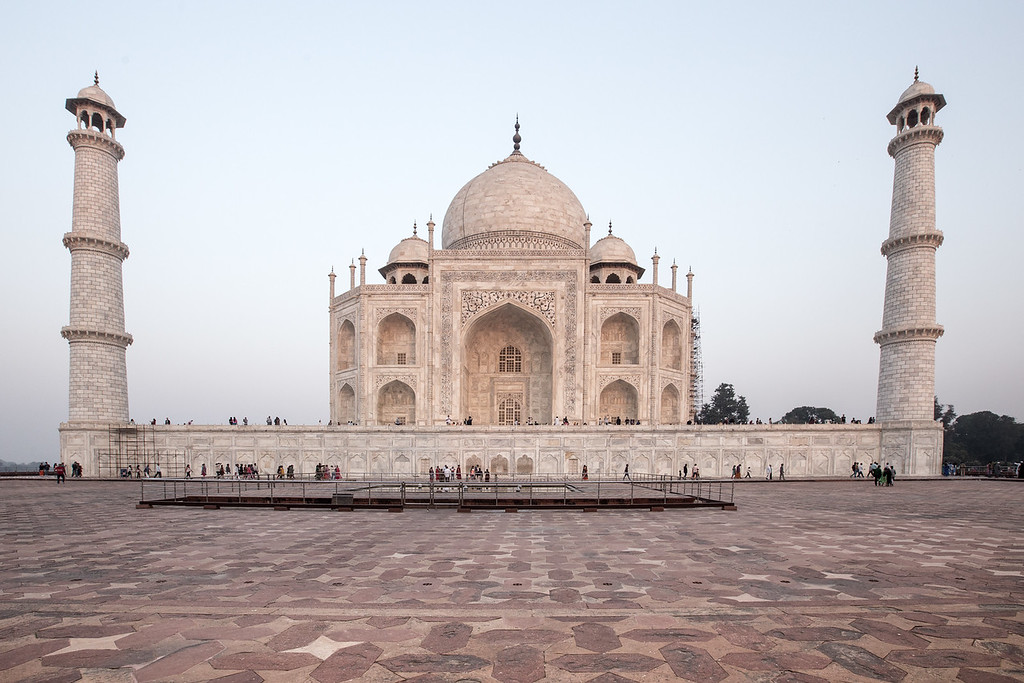 The Taj Mahal may be the primary reason to visit Agra, but it is far from the only thing to see. En route we visited the magnificent fortified city of Fatehpur Sikri, once the capital of the Mughal empire, but later abandoned due to lack of water and we actually caught our first glimpse of the Taj Mahal from Agra Fort, an excellent example itself of Mughal architecture. Even without the Taj, Agra should be on must-see lists. But, yes, the Taj Mahal, one of the most famous buildings in the world, was the what we were all itching to see. This amazing tribute by a grieving Shah Jahan to his beloved second wife who died during childbirth is every bit as impressive as I imagined it would be. As spectacular as some of the photos are, they don’t begin to do this white marble monument the justice it deserves. If a picture is worth a thousand words, I would say there are not enough words to accurately convey the splendor and opulence seen by visiting the Taj Mahal in person. 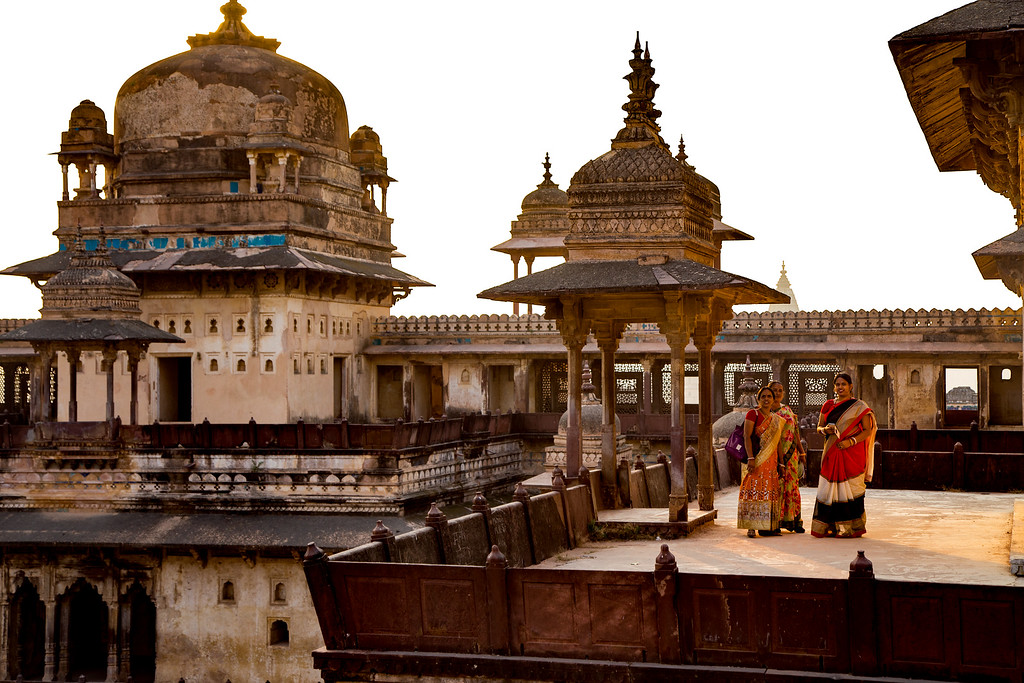 After the crowds of Agra, a visit to Orchha was a welcome, laid-back experience. At sunset in Jehangir Mahal Palace, we were able to explore alone through the quiet rooms and climb the narrow staircases for a private view of the village below. There were so many temples I could see along the river; the experience reminded me of being in Bagan, Myanmar. It was easy to picture Jehangir Mahal in its past splendor with remnants of turquoise tiles and other fine details still available to see. I believe Orchha is just now making it, barely, on the tourist RADAR and now might be the perfect time to see it.

Detail from the Western Group of Temples in Khajuraho, India

There are a lot of ways I could approach discussing the temples in the Western Group in Khajuraho, but I guess I will do it straight. I am no prude, but it is a little surprising (and a little funny) to see such a profusion of erotic art in a 10th-century Hindu religious site. The temples themselves are stunning both from a distance and in detail. The art is both intricate and well-preserved. From a distance, you would never be able to tell why these refined structures are nicknamed “the Kama Sutra temples,” but if you look closely among the other depictions of ancient life you will see a surprisingly laid back attitude toward sexuality (and apparently a lot of flexibility).

Life on the Ganges in Varanasi, India

Varanasi was the last city on the Indian portion on the “Highway to the Himalayas” tour and one of the places I was most looking forward to seeing. This is where I most wanted to make pictures of INdia and it diddn’t dissapoint. This holiest of cities in India is also one of its most jarring and visceral of all that I saw. After our sunrise boat ride on the Ganges, while everyone else went back to the hotel to catch up on their sleep and have breakfast, I stayed behind to wander along the shoreline. I will write more about it in another piece but, suffice to say that Varanasi moved me. I sat for a while and watched families bathing in the polluted waters of the great river. I walked among the funeral pyres on the cremation ghats. I watched people doing laundry in the muddy waters and hang it flat on the shore. It was both disturbing and fascinating. I saw things I never wanted to see, but I was incapable of turning away. The was India at its most raw and I loved it.

So, did India meet my expectations? It surpassed them! Do I feel that I know India? Not even close. To me, India remains an enigma. But, my On the Go tour whetted my appetite and showed me places that, even after having been there, still fuel my imagination. The low hassle factor of the tour highlighted some places I would like to return to and gave me the confidence to realize that, although it may seem overwhelming when taken in manageable chunks, India can be accessible to anyone who desires to see it. India offered some of the most intense experiences I have had while traveling and, like that second serving of curry, a small taste makes me crave even more.

A few hours driving after leaving Varanasi we had reached the border of India, but the trip was only changing gears a bit. Tomorrow we were to begin exploring the top of the world in Nepal.