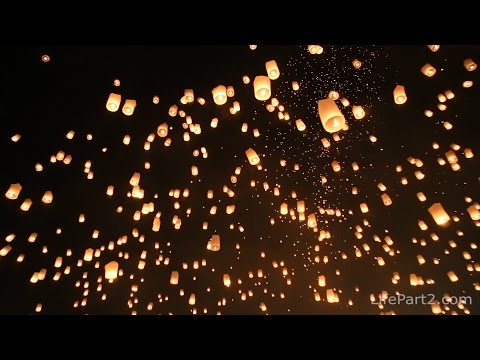 Video of the Lantern Festival in Thailand

Why I Love The Thai Lantern Festival

It is hard to believe that 2014 will mark my third Yee Peng in Chiang Mai, also known as Paper Lantern Festival in Thailand. This event is on so many “Top 10 Things To Do” adventures for obvious reasons and I can’t believe I have seen three. As a photographer, it is without a doubt one of the most amazing things to photograph, yet also something that is hard to capture correctly so I keep trying. I also seem to learn more about this festival every year.

What Is The Yee Peng Festival

Yi Peng (Yee Peng) Thai Lantern Festival always roughly coincides with Loi Krathong, another festival/ceremony where instead of putting lights in the air, the lights are floated on the water to bring good luck and pay merit to Lord Buddha. Apparently also at/around this time is the Lanna Kathina Ceremony where monks get their robes and lantern are set of in celebration of that as well. All I know for sure is that it is all very beautiful and the dates are related to the phases of the moon, kind of like Easter, but the exact timing seems to be more flexible than the orbit of the moon and so on occasion, the dates aren’t determined until almost the last minute.

When Is The Lantern Festival in Thailand?

Also, there are two Yee Ping/Loi Krathong/Lanna Kathina Ceremonies (Lantern Festival Thailand) that take place on different dates. These images are from the event that took place on October 25, 2014, that is mostly for locals and is free. There is another event to take place on November 8, 2014, that is a paid event and is more tourist-friendly, and costs around $100 to attend. I have been to both and they are both amazing.