The Pyramid I Climbed at Tonina Mayan Ruin Site in Chiapas, Mexico

I really didn’t know what to expect when I visited the ancient Mayan city site of Tonina this week. It is only a few hours from home, near Ocosingo, on the road from San Cristobal de las Casas to Palenque. It is one of Mexico’s lesser known Mayan Pyramids and, its close proximity had somehow made visiting Tonina kind of a non-priority. I have seen many ruin sites before and in truth, my expectations were pretty low. How could anything compare to Chichen Itza, Palenque or Tulum?

Approaching Tonina’s almost abandoned visitor’s entrance didn’t really do anything to raise expectations. At the entrance, there was nothing more than a guard shack/ticket booth and a gravel parking lot with sleeping dogs, a few chickens and a couple of small tiendas.  I had made the drive so I shrugged my shoulders, bought a ticket and started walking toward the, so far not visible, ruins, almost a kilometer away.

Museum Artifact from the Tonina Mayan Ruin Site in Chiapas

On the way in I was surprised to find a well-kept, modern looking museum designed to look like a new temple. Inside there were several dozen substantial artifacts, mostly from the 6th through the 9th century, beautifully displayed on well-lit stands and shelves.  A few even had the brightly colored original pigments still covering them. There were explanations (in Spanish only) about how Tonina was once a regional powerhouse; home to celestial lights, sacred calendars, ancient deities, and rituals. There was even some speculation about what might remain to be uncovered as archaeology continues at the site.

As I left the museum and continued walking I encountered cow pastures, Zapatistas offering horseback rides and finally, in the distance, I could see Tonina rising out of the jungle. It seemed almost unworldly. Towering temples and pyramids sat on terraces rising over 220 feet above the landscape. Nearby was a small sunken ball court, a huge plaza and several small ancient monuments scattered about. But most impressive were the pyramids and temples set high upon the acropolis.

By wandering around a bit I found that this was one of the ruins not yet blocked and guard railed against visitors. In fact, there were signs encouraging visitors to climb upon and explore the site. Even though the sun was beating down, the temperature was rising and my shirt was already soaked through from humidity I impulsively decided that I want to climb to the top.

On the easy low part, I stumbled upon an unlabeled labyrinth that I later learned is known as the “Palace of the Underworld”.  Very dimly lit passages and staircases are entered via three step-vaulted arches on the second terrace. The coolness was a welcome relief from the torturous sun but I soon found myself having to shuffle my feet, feel along the walls and reach my hands above my head lest I stumble down an unseen stairway, miss a turn or bash my head on a low doorway. I expected that at any minute someone would reach out and say boo or I would have to claw myself Indiana Jones-style through spider webs and snakes but I was truly utterly alone. I saw no creatures from the underworld but it was only dark, eerie and in some ways peaceful. 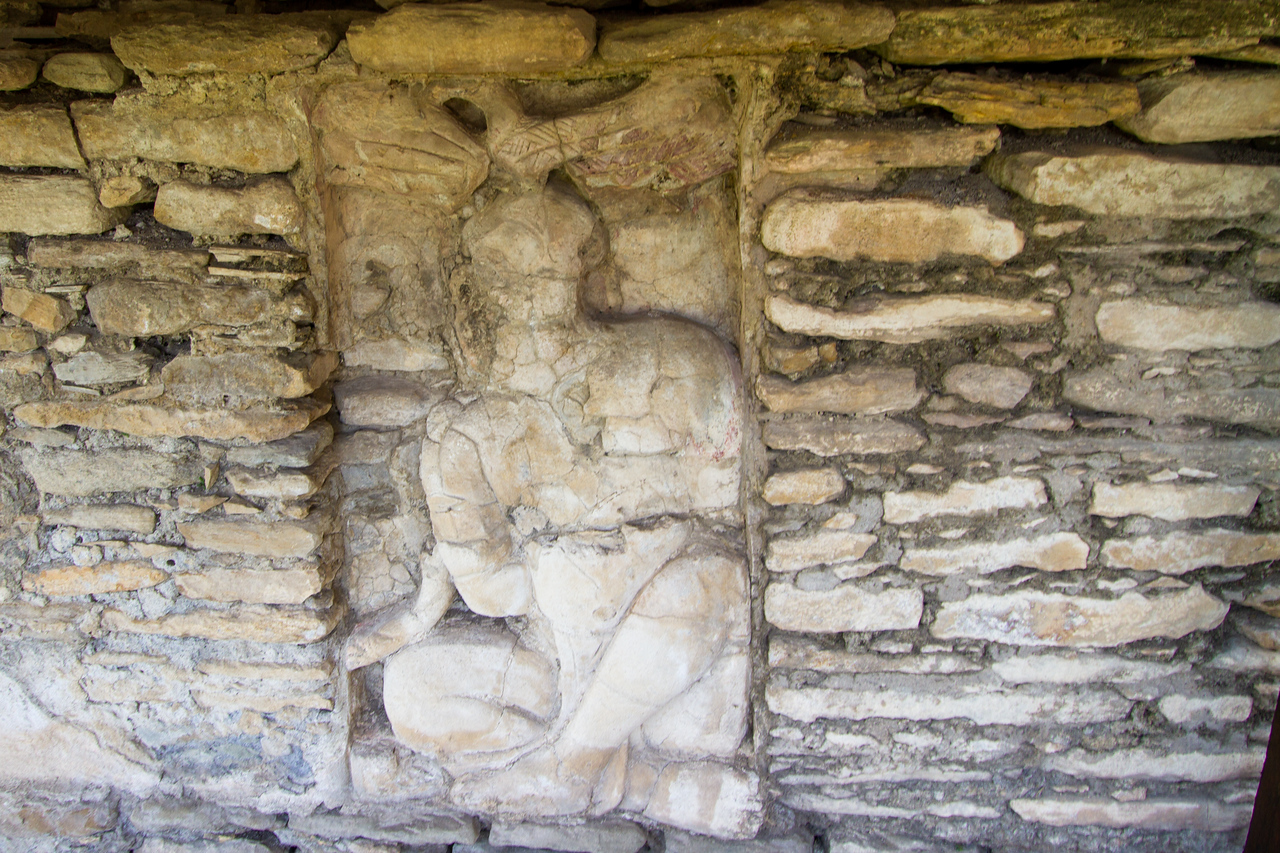 Guardian at the Entrance of the Underworld at the Tonina Mayan Ruin SIte in Chiapas, Mexico

After a bit, I found my way back into the sunlight and began to climb again. Because I only had the hand strap for my camera, and therefore only one free hand, as the climb got steeper and the steps became narrower, maintaining balance and footholds became more difficult.  There were, however, every so often a narrow platform to rest on and enjoy the ever-improving vista. As I continued upward I walked, scooted and crawled by several stucco murals depicting supernatural scenes including the “Frieze of the Dream Lords”, which depicts a feather-covered scaffold from which hang the severed heads of sacrificial victims and many glyphs depicting angry Mayan gods.

After half an hour or so, I found myself at the side of the last pyramid before the summit. This last climb was to be even steeper and the foothold ledges – can’t really call them steps now – were much narrower than the others. I walked completely around the landing hoping to find an easier way up but there was nothing. For a few seconds, I considered stopping and heading down but decided to adventure forward to the peak. I started up by placing my camera on one of the ledges as high as I could over my head, so I could use two hands for support. That way I could reach up and find a handhold, take a step up, make sure my boot found solid purchase on the not too solid rock then bring my other foot up beside the first. I could generally repeat this twice before I had to reach, now below, grab the camera and pass it to another ledge above and continue the climb. It probably took no more than five minutes but my heart was racing as I summited the pyramid. On top was a flat rough stone surface, probably no more than four feet square where I could sit and admire where I had climbed from. Butterflies flitted by, swifts chittered overhead and I had a 360-degree view of the verdant Las Cañadas de Ocosingo valley. There was a nice breeze and I caught my breath. I snapped a few photos then reversed the process and started back down. 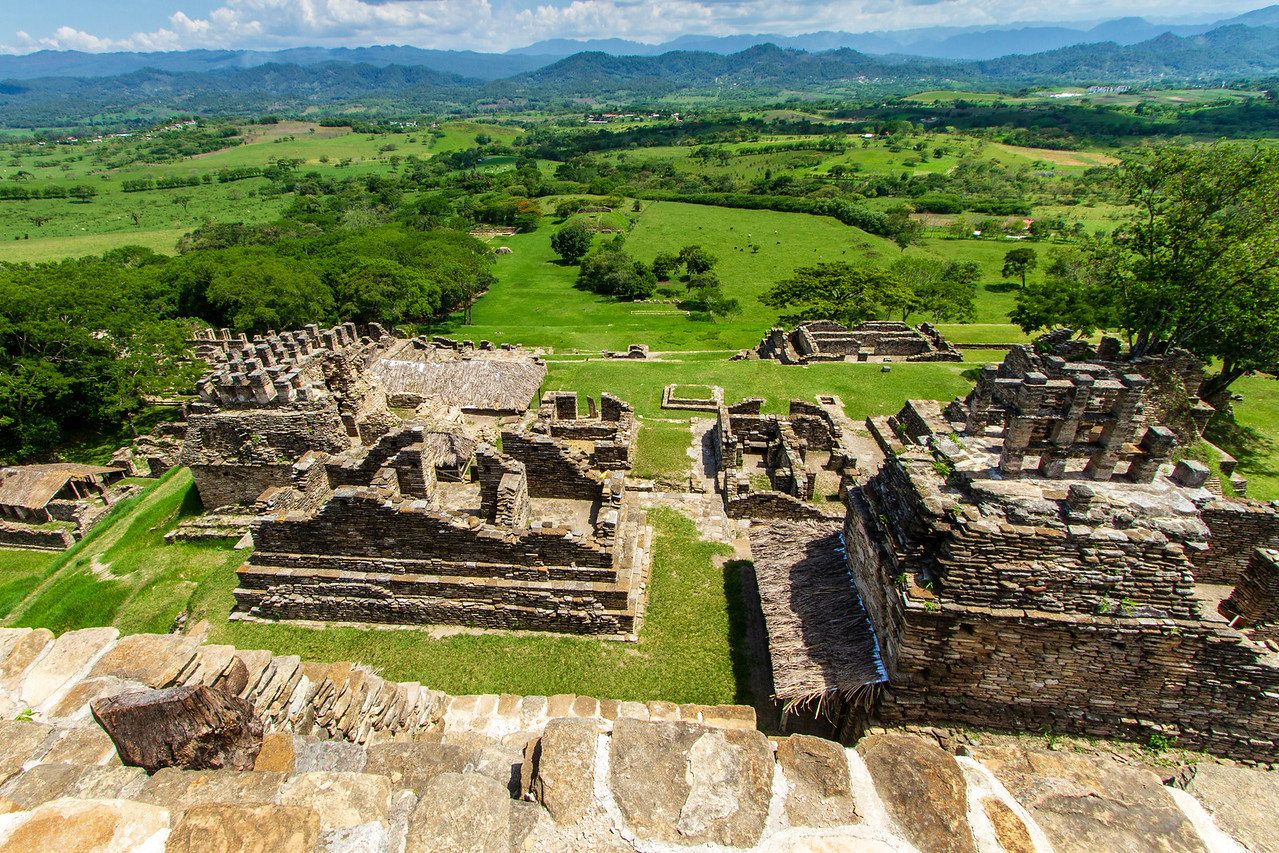 Tonina is not on the 2012 Maya Tour list and for me, that is part of its appeal. Being able to experience a true wonder of the Mayan world practically alone is an unusual and progressively rare event. Once again I was rewarded with a wonderful experience because I didn’t allow first impressions and the lack of a throng of tourists and tour buses detour me from what turned out to be an easy day trip and a great adventure. I loved it!