Amazing Pictures of the Temple of Kom Ombo 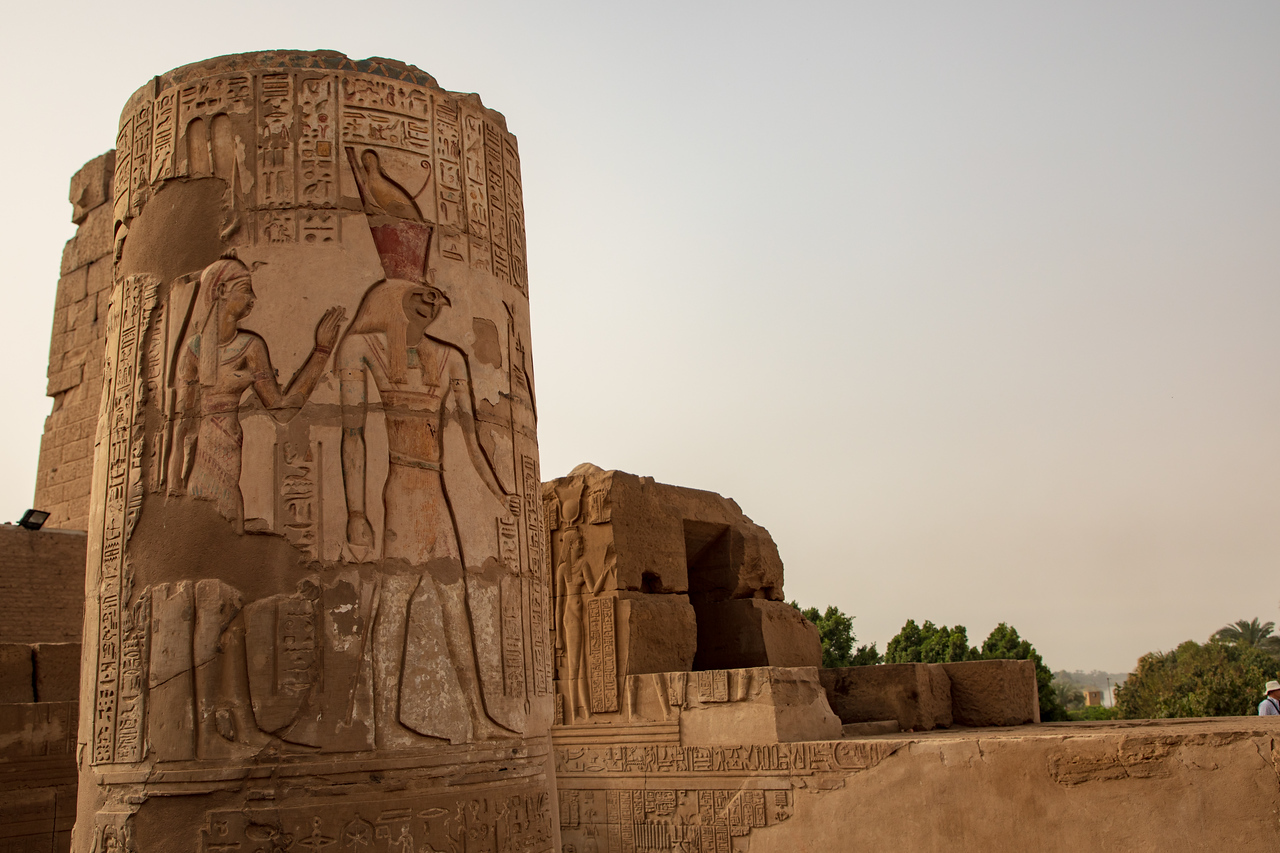 All relaxed from our Felucca Cruise on the Nile, we delved back into ancient Egyptian history with a visit to the Temple of Kom Ombo, on the banks of the Nile River. It was astounding how well preserved the temple is, particularly the detail on the murals and the columns, some of which have paint that has lasted for more than 2,000 years. 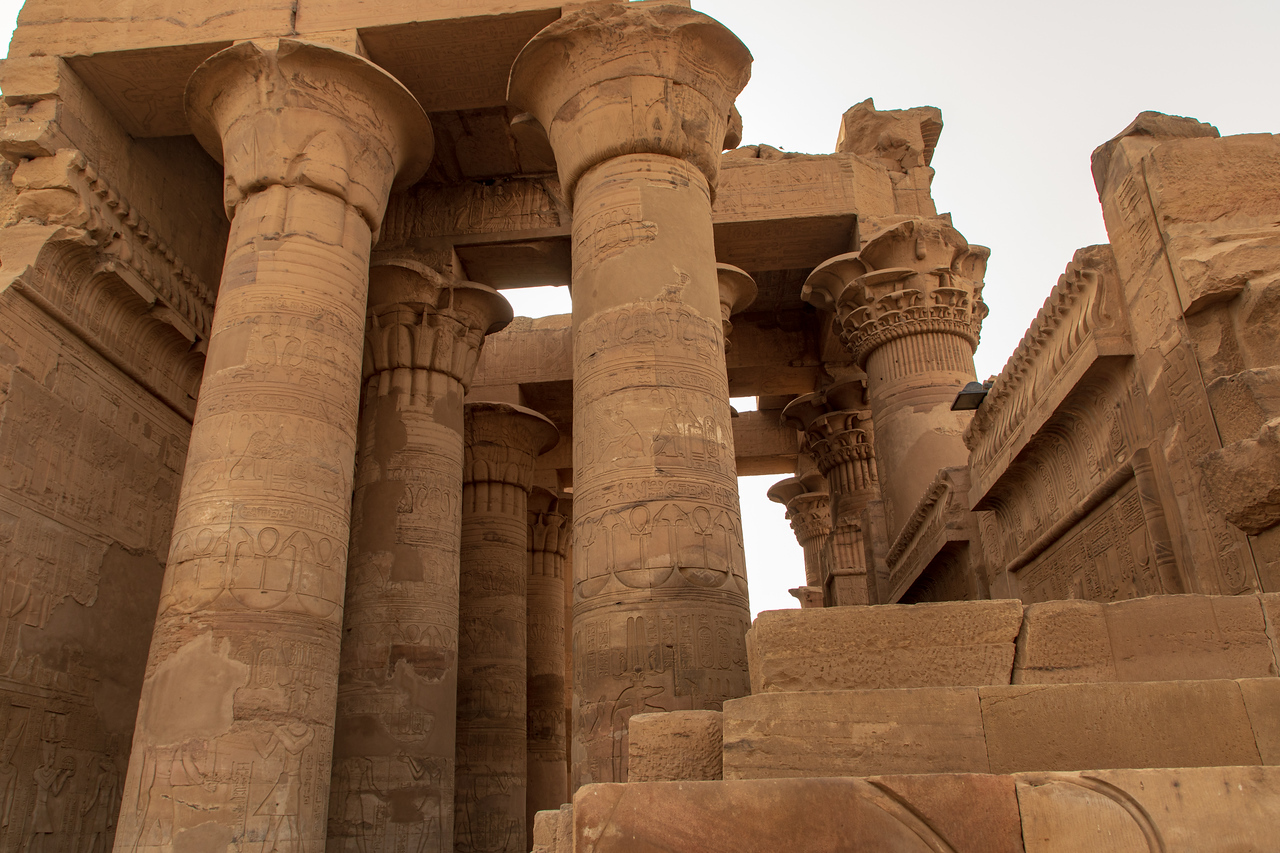 The original construction of the Temple of Kom Ombo was begun during the Ptolemaic period in 180–47 BC with later additions made during the Egyptian Roman period. You can see evidence of the Greco Roman origins in the designs at the tops of the columns. Kom Ombo is unusual in that it is a double temple, with the southern half of the temple dedicated to Sobek, the crocodile god or fertility, and the northern half dedicated to the falcon god Horus. There is a small museum on site that has some weird crocodile mummies. Kom Ombo was also believed to be a place of healing, and in the Horus part, our Egyptologist/guide Alam took us to see depictions of ancient surgical instruments carved into the murals. In the modern world, the eye of Horus is often seen as a symbol of healing and restoration. 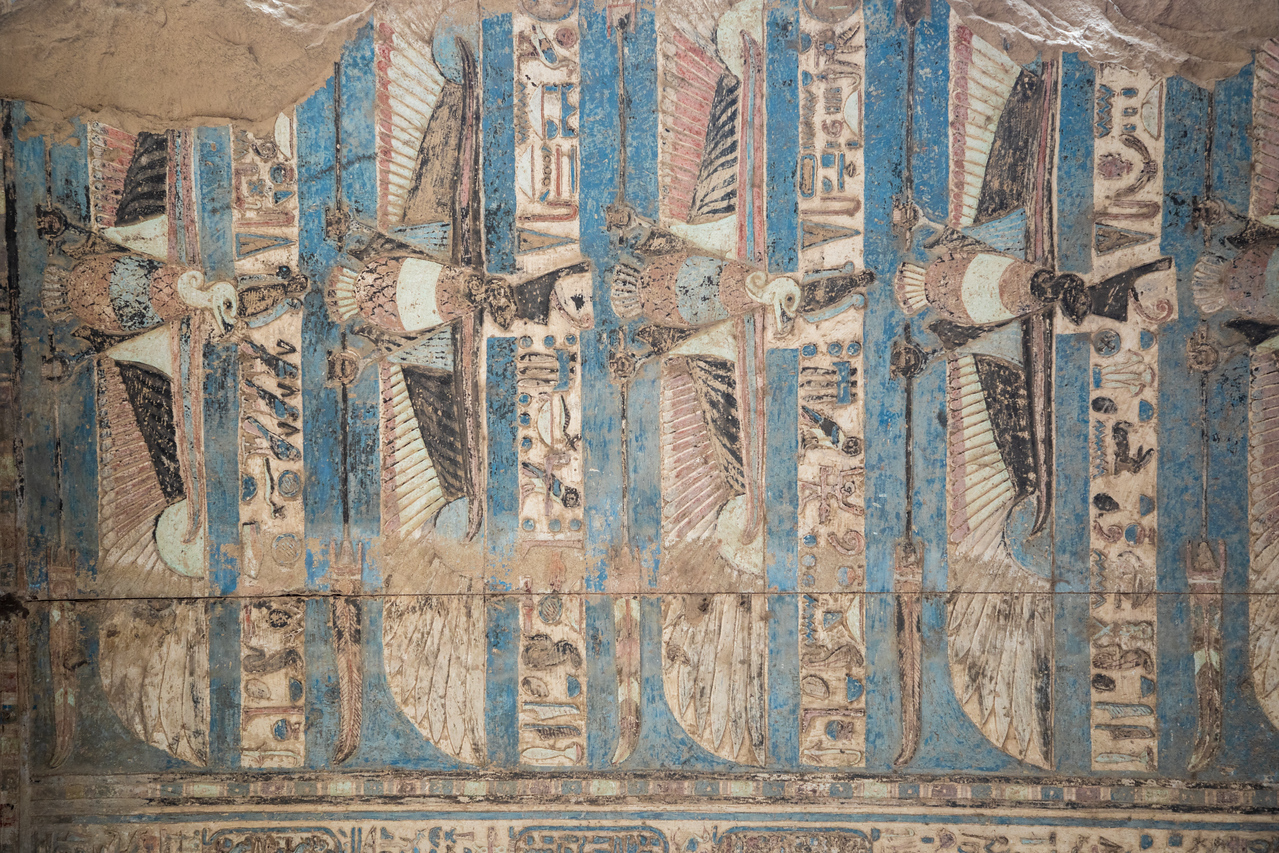 One of the Reliefs Inside of Kom Ombo Temple, with 2,000-Year-Old Paint

In Arabic, the word “Kom” means “small hill” and “Ombo,” in ancient Egyptian language means the “gold.” So, Kom Ombo, in ancient languages was called the hill of the gold. 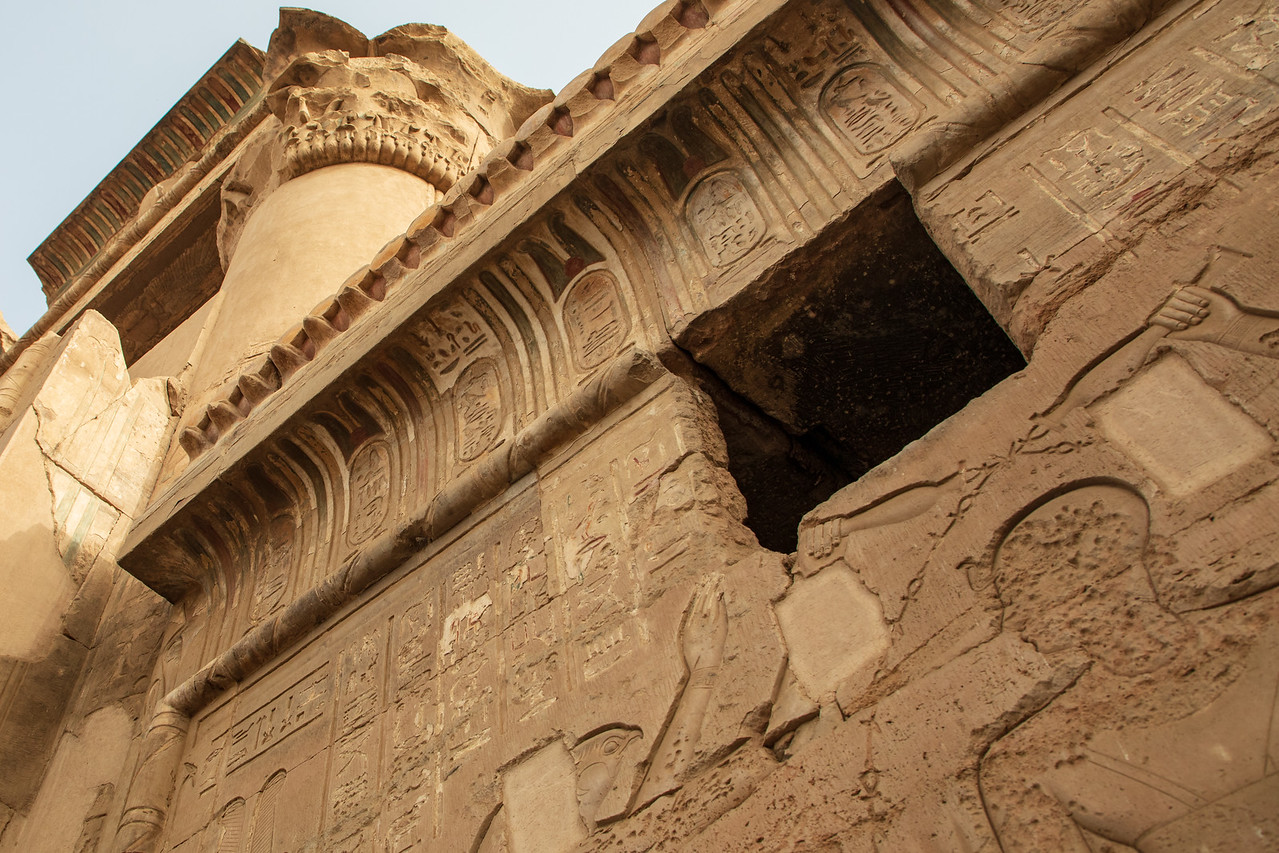 Greco Roman Above a Painted Cornice and a Vandalized Relief Carving

In what seems to be an ongoing theme in Egyptian temples, many of the reliefs inside the Temple of Kom Ombo have been vandalized away by Christians who wanted to use the temple for their purposes but didn’t seem to want to respect the history or culture. 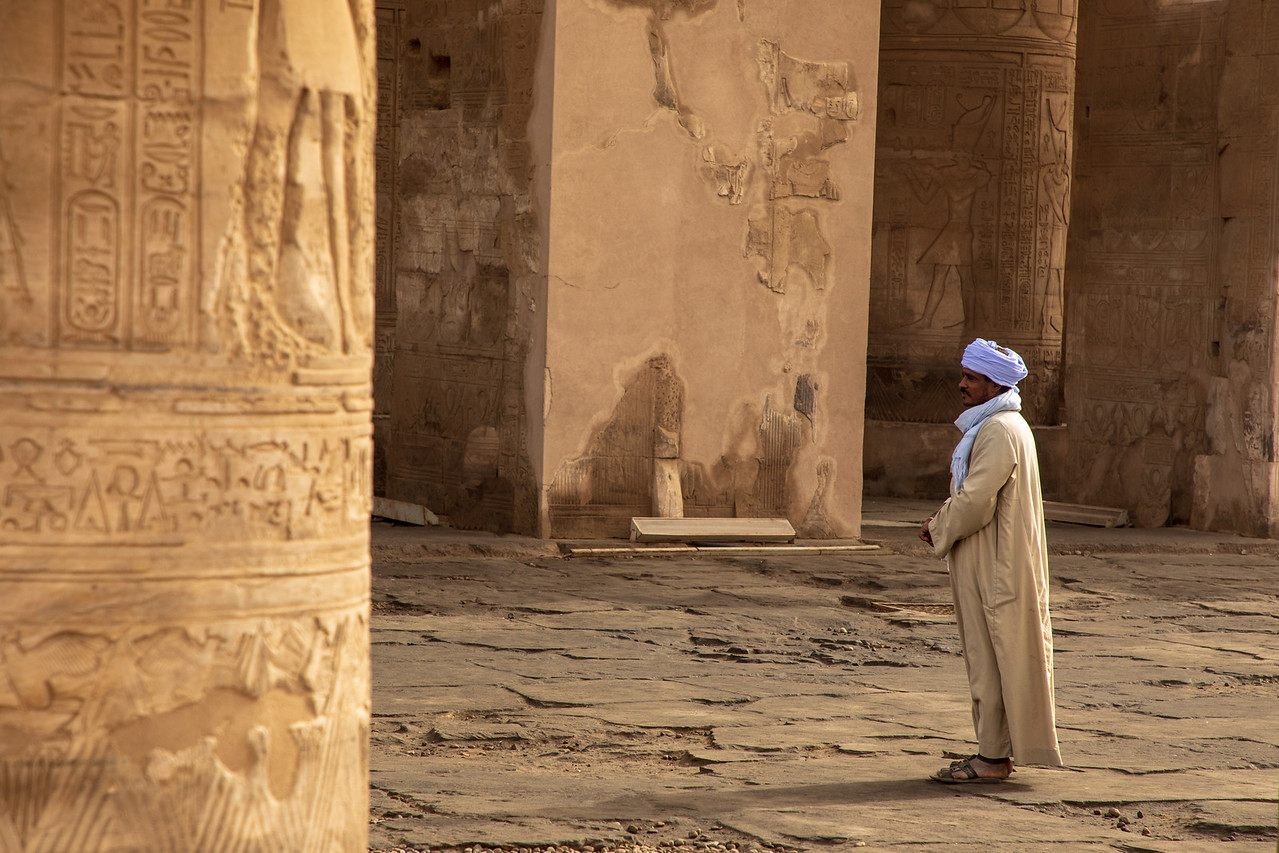 A Guard in the Courtyard of the Temple of Kom Ombo

How to get to Kom Ombo Temple

Most people including myself visit Kom Ombo Temple as part of a tour, but it is quite easy to visit independently too. The easiest way would be to take a taxi from Aswan or Luxor. It is also possible to take a local bus from Aswan to Luxor which makes a stop at Kom Ombo Temple, as does the tourist train from Cairo to Aswan.

Tickets to enter Kom Ombo Temple cost LE30 (less than $2 USD). The price of the ticket also includes admission to the Crocodile Museum.

Wear comfortable shoes and brings sunscreen.
If visiting independently, try to arrive just before 9:00 AM or after 4:30 PM to avoid the crowds as this is a favorite stop on the River Nile cruises.
If you visit on a Tuesday or Thursday, you can combine a visit with a camel market in the nearby town of Daraw.
Snacks and refreshments are available but always a good idea to bring some with you.

I was at the Temple of Kom Ombo as a guest of On the Go Tours on the Abu Simbel Sun Festival Tour, which is an easy, and a very enjoyable way to experience Egypt. Also, On the Go is offering an exclusive deal for LifePart2 readers – save $100 off any Egypt tour with On The Go Tours! Head over to their website to find your perfect itinerary and get in touch, quoting “LifePart2” to get your discount.