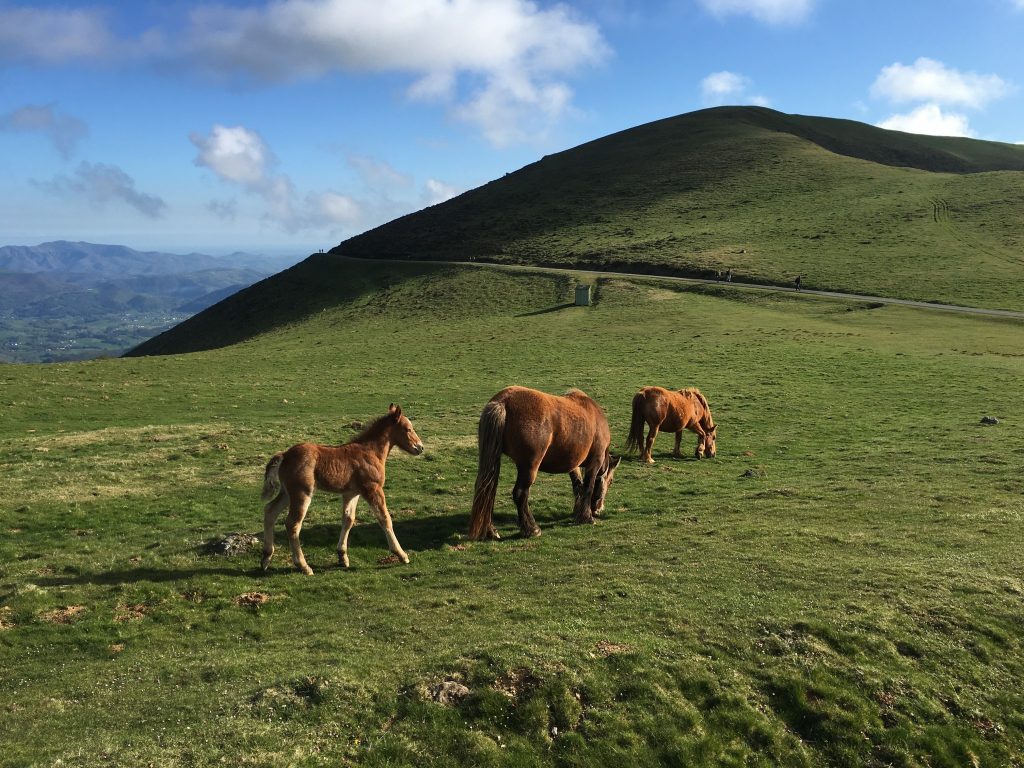 Horses on the Camino de Santiago

After a fitful night’s sleep, we woke at Refuge Orisson about half an hour before sunrise. The room and the bed were comfortable, but it is difficult to sleep in a dorm room when there are snorers. The funny thing was, as Sarah and I were gathering our things to go, the loudest snorer, the one that had kept us up most of the night said, “Could y’all be a little bit more quieter, there are still people tryin’ to sleep.”

We ignored that, grabbed a few pieces of toast and two takeaway sandwiches from the Orisson restaurant and started walking further along the Camino de Santiago. There was already a steady flow of walkers as the sun rose and tried to fight its way through the clouds. As we passed above the tree line and finally lost site of the Orission below, the sky was beginning to clear, but a cold wind was starting to blow. 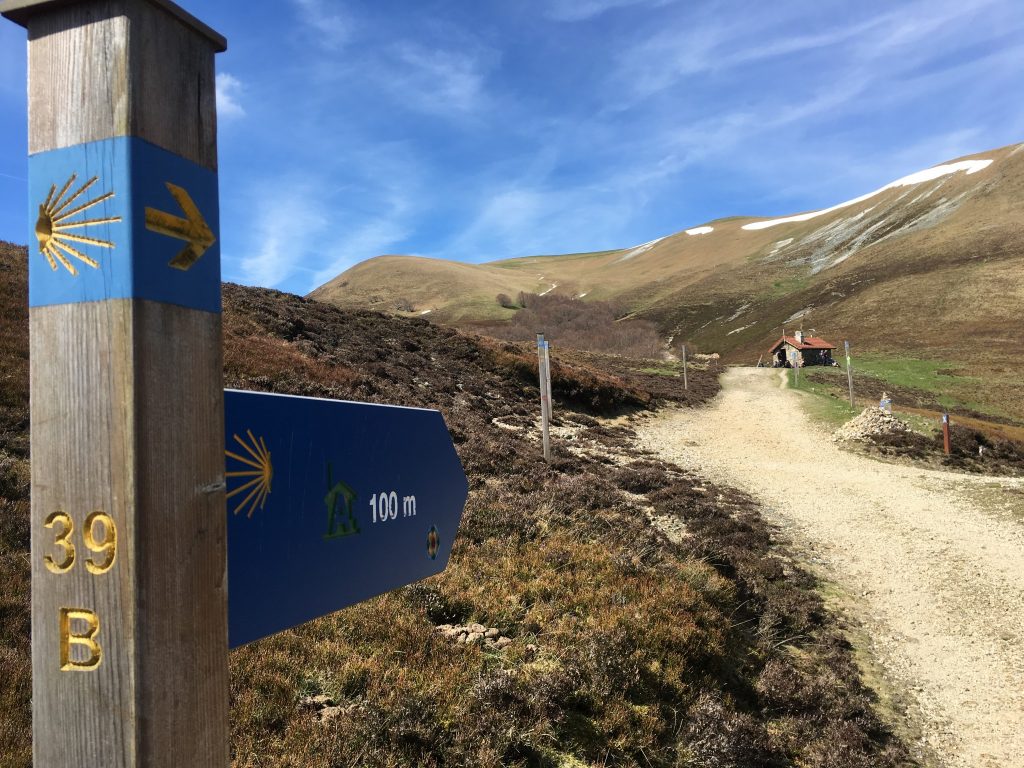 In the far distance we could see craggy, snow-capped peaks, but where we were crossing the Pyrenees, it was mostly green pastureland. This is the longest portion of the Camino de Santiago without places to stop for food or accommodation. After a few hours we did come across a guy selling coffee and hard boiled eggs from a van. We bought some and devoured them with no fanfare but much gusto. From here it was still ever higher for almost another hour.

To an outsider, the border here between Spain and France seems a little muddled for this is “Navarra” and the Basque don’t much care for the borders that they feel were forced upon them by powers they don’t recognise. However, at some point, we reached the highest point, left the tarmac for a gravel trail, crossed the unmarked border, and eventually, with much relief, began to travel back downward. It didn’t take long to get below the tree line, and soon we were walking through a Beech Tree Forest on trails covered with a carpet of leaves. The forest was so dark that when eventually we broke into a clearing we had to shade our eyes from the blinding sun.

Here there was an old stone emergency shelter where many pilgrims had decided to have a picnic, and we joined them. Never had a mere sandwich of French baguette and country pate tasted so good. From this vantage point, you could see for hundreds of miles in almost every direction. We could have lingered longer and slept in the warm sun, but the weather was perfect for hiking, and we were starting to enjoy being on the move.

The Decent into Roncesvalles

We arrived at 12th Augustine abbey of Roncesvalles at about 2 PM. Roncesvalles has long been an important stop for pilgrims on the Way of Saint James and there is a huge dormitory available, but it was only 2 PM or so and Sarah and I, after getting our Camino credentials stamped, decided to carry on into the next town. Here the trail runs through a passageway that takes you through the Gothic collegiate church Colegiata de Santa Maria and into the town. We stopped for a quick coffee and began walking again.

We had decided to stop in Auritz, about 3 kilometres down the trail, but when we arrived the entire town felt dark and cold. There was an eerie feel to the place. The few restaurants that were open were uninviting and without character. We stuck our heads into a couple of guest houses, but the ones we saw seemed to have a creepy feel about them. We both looked at each other and decided to continue to the next town. As we were leaving, on the outskirts, we saw a small church with a sign that described how Auritz was formerly known for witchcraft and in 1329 there had been witch burnings in the village square.

On the other hand, Espinal, the next village down, had a much better feel. We wandered the streets a bit and came upon the Hostel Haizea. We peeked inside the restaurant area and saw two friends we had made from the night before at Refuge Orisson. They said the dormitory was fantastic and, without even having a look, booked a bed for €12 euros each for the night. Everything was in fact spotlessly clean; there were laundry facilities and the place had a warm and friendly feel. Again, we ordered the Pilgrim Meal, this time it was spaghetti Bolognese, roasted pork loin, and French bread. Again, there was also free-flow wine, and by the end of the evening, we had made many friends.

Distance Marker near the Border of France and Spain