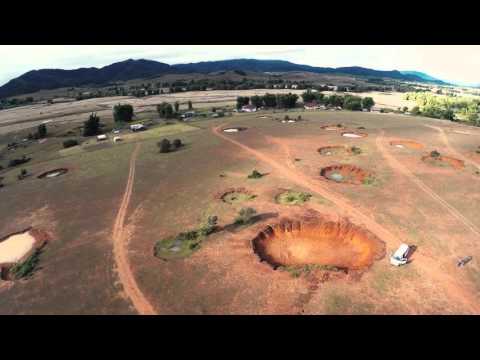 Here are a few images and a drone video I made of bomb craters in Laos. These craters were created over two generations ago by so-called “carpet bombing”. This mutilation of an otherwise bucolic landscape was created by heavy bombs, indiscriminately dropped by B52s, piloted by, what the Laotians saw, as faceless people, originating from half a world away, upon what was mostly simple farmers and country folk. You can still see the effects everywhere in Xieng Khouang Province and many other areas in Laos. In fact, there were so many bombs dropped on this area that people today use casings from unexploded bombs as building material and scrap metal to make things such as silverware and jewelry.

From 1964 until 1973 the United States dropped the equivalent of a planeload of bombs every eight minutes onto the people of Laos. Oftentimes, because the military policy wouldn’t allow bombers to return from Vietnam to their home base with munitions on board, they would just randomly rain their deadly cargo on Laotian territory without regard to where they were or for the innocents. There are still millions of units of unexploded ordnance (UXO) on the ground in Laos, menacing the people, rendering fertile farmland unusable and continuing the terror of the past. During the “secret war” the U.S.A. spent over $44 billion dollars bombing Laos, but today we spend less than $3 million dollars a year cleaning up the mess the current generations of Laotians must deal with.

When you visit this area, the damage, not only in the form of the bomb craters ugly scars on the earth, but also in the eyes of the people, is visible to anyone that wants to see. Even now, over forty years later, there is almost one casualty a day from people encountering unexploded ordinance somewhere in Laos. Most of the injured are children.

Politicians like to fire up an easily led electorate by proposing “simple solutions” like sending other people kids to put “boots on the ground” or “carpet bombing” faceless people in faraway places to “protect the homeland”. Little regard is given to failures of the past, how ineffective these bellicose policies have been and how they tend to destabilize regions and radicalize new generations against us. It is only when you see these failures first hand do you begin to realize how military force should be a sober, last resort action against existential threats; not the thoughtless rhetoric, or action, of schoolyard bullies. It especially shouldn’t be a method of generating attention, capturing “low hanging” votes, or as a method of somehow repaying campaign debt.