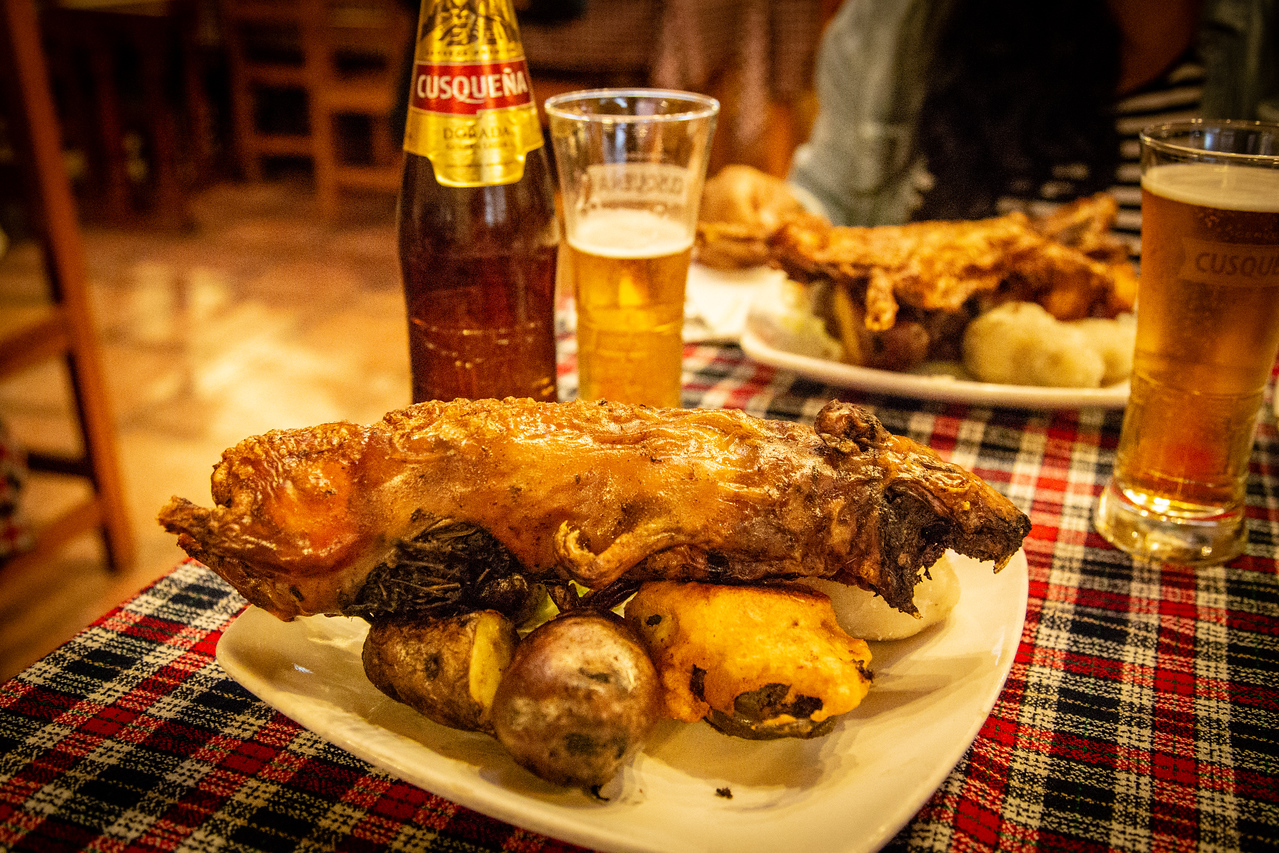 Admittedly, eating a Guinea Pig dish in Peru was a bit Intimidating

I ate Guinea Pig in Peru because I have always been fascinated by different kinds of food. I have tried chili and green onion crickets in Cambodia, pig’s blood tofu, silkworms and even an occasional bit of alligator or snake has crossed my plate from time to time.

When I visited Peru a few weeks ago, even though my threshold for revulsion is quite high and I was hesitant, I wanted to try “Cuy”, or Peruvian Guinea Pig, a food revered by the people indigenous to the Andean Highlands.

Admittedly, I am not immune from the “cute factor” when it comes to consumables. I know I shouldn’t be so shallow as to judge the value of my protein by how adorable it was when living, but Guinea Pigs are animals that many of my friends kept as pets when I was growing up.

Intellectually I knew if I wanted to be consistent and started rejecting foods in this way I could never eat bacon again, and I love bacon! (Pigs are arguably cuter than Guinea Pigs and are demonstrably smarter.)

Fish are also quite fetching too in an aquatic sort of way. Now that I think about it, cows and birds are quite adorable too. I am not ready to turn vegan so I knew that I needed to get over my irrational prejudice toward these furry little rodents and give them a try.

When I thought about it, I knew clearly it is more respectful to animals when we acknowledge that their meat was once a living being and appreciate it as such before we consume it.

As much as we don’t want to acknowledge it, the meat that we buy at the grocery store, shrink wrapped and on a Styrofoam tray, was once just as alive as anything else we eat. That we don’t see it in this way doesn’t change the facts and, to me, it would be hypocritical to not confront the facts and my culinary predilections.

It was with this in mind that I went into a local family restaurant in Cuzco and ordered the Peruvian Guinea Pig dish “Cuy al horno” or, roasted guinea pig and a Cusqueña beer, just to take the edge off. The cuy came served on a white platter with Rocoto Relleno (stuffed chile peppers) and the delicacy Chuño, a type of potato that is freeze-dried high in the Andes.

The Guinea Pig had been cleaned, stuffed with aromatic herbs and baked in a wood-fired oven. The skin was browned, similar to how roast pork looks, and if I closed my eyes, it smelled quite delicious.

Admittedly it was a little disconcerting that the head was still attached, but this only made it a more accurate portrayal of what I was about to consume. It seemed to me too that the ones for eating were a bit larger than the ones I remember as pets from childhood.

When it comes to the environment, Cuy is actually far more efficient at turning vegetable matter into protein than many other animals, especially cattle. Many Peruvians are mostly vegetarian and only eat meat, including cuy, on holidays and special occasions. Guinea Pigs are raised on vegetable scraps that otherwise would have gone into a landfill or composted.

In Peru, Guinea Pigs aren’t kept as pets per se but raised with somewhat the same attitude that an American farm family may have about chickens.

So, what does Guinea Pig meat taste like? To me, it was most similar to dark meat turkey, but perhaps a bit gamier. Tasty enough but I have always been more of a breast than a drumstick man.

The skin was in places crispy and in others quite chewy, almost tough. It was also hard to get at the meat. You have to dig around to get to the good bits, kind of like eating crab, and the tendency is to get tired before you get full.

Would I eat it again? Sure, I guess, but I don’t think I would seek it out. There are dozens of Peruvian foods that I love more than cuy, but you never know unless you try.

See here for more memorable meals from around the world.