Fun Pictures of Sinterklaas and Black Pete in Amsterdam 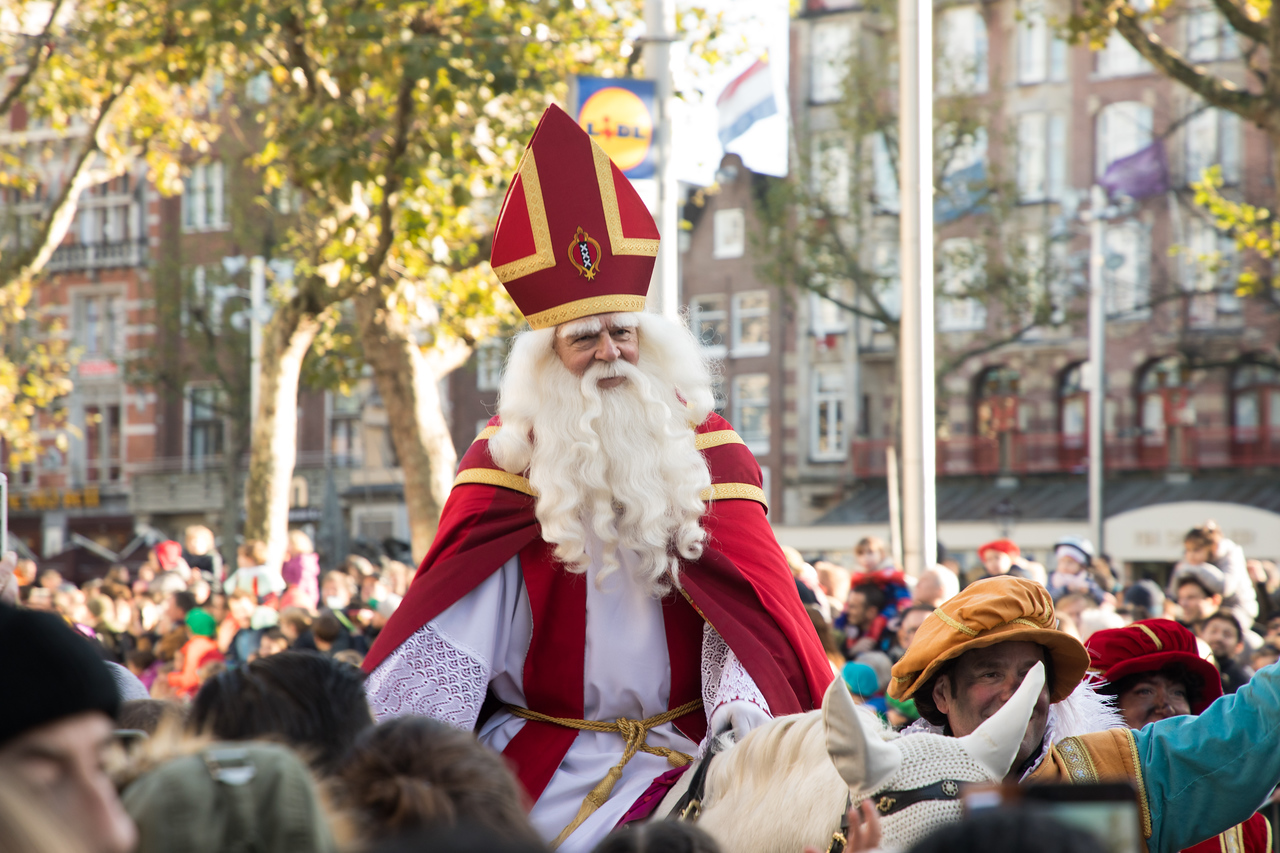 Sinterklaas on His White Horse Amerigo

Sinterklaas and Black Pete in Amsterdam

Every November, Sinterklaas (also known as Saint Nicholas) travels from his home in Spain to the Netherlands. Dutch tradition says Sinterklaas lives in Madrid and each year he arrives into the Netherlands via a different port. Travelling with him are his Zwarte Piet helpers who bring special treats and gifts for the children.

This major festive event includes a boat parade, followed by Sinterklaas riding his white horse, Amerigo through the streets of Amsterdam. His mischievous Piet helpers travel alongside, some on rollerblades, others abseiling walls. 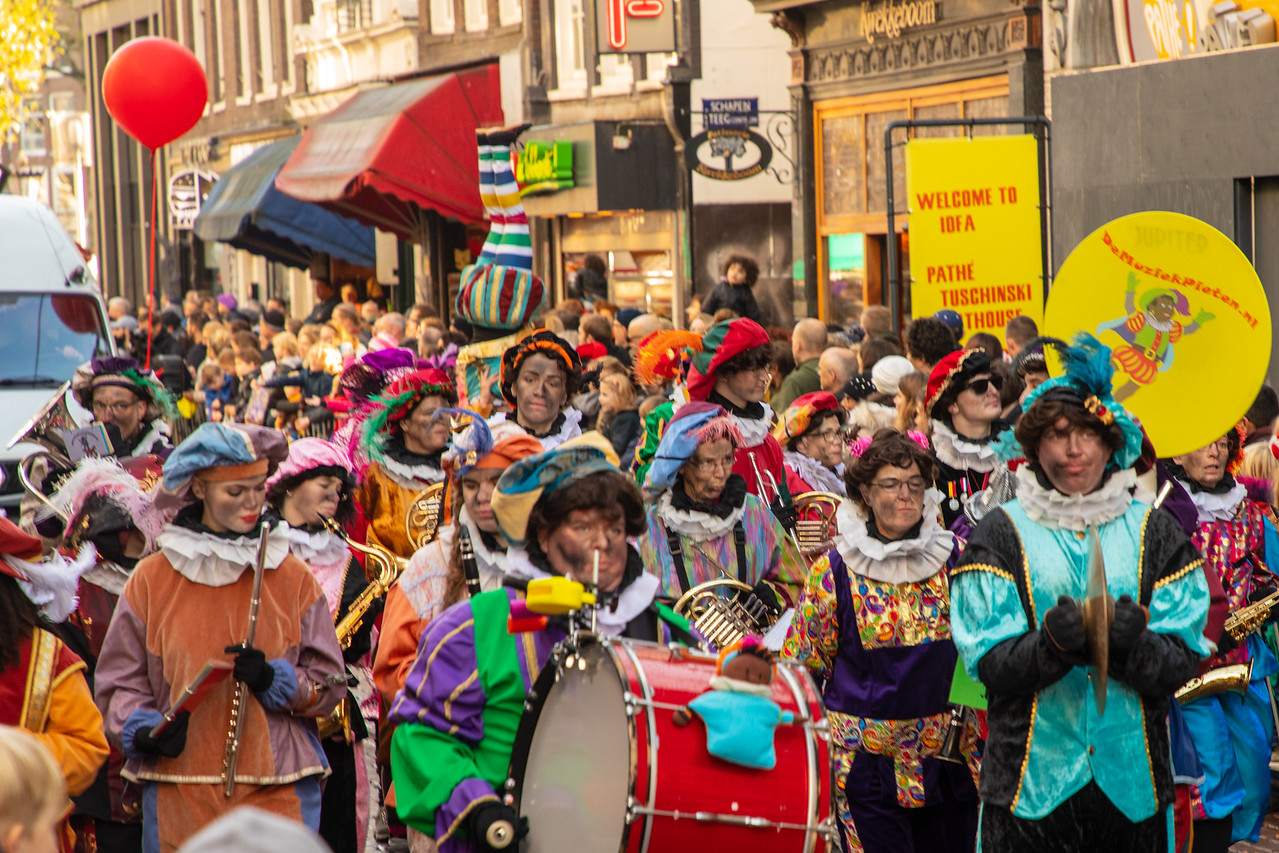 Mayhem in the Streets of Amsterdam During the Sinterklaas Celebration

Last year, our arrival into Amsterdam from our Viking River Cruise coincided with the arrival of Sinterklaas. Not sure who was more excited – me or the loads of children lining the streets waving excitedly and collecting the sweets and candies that were being thrown into the crowd. Me probably- I have a very sweet tooth!

So Who Is Sinterklaas?

Sinterklass is based on Saint Nicholas (270-343), a Greek bishop in Myra which is now part of modern-day Turkey. He looks remarkably similar to Santa Claus or Father Christmas with his long white beard and red attire!!

Apparently, he now resides in Madrid with his helpers. They say he lives in Spain because, in 1087, half of Saint Nicholas’ relics were sent to Bari, Italy which later became part of the Spanish Kingdom of Naples. European history can be so confusing!

Another version is because mandarin oranges are traditional gifts at this time, therefore he must come from Spain. I like this version more! 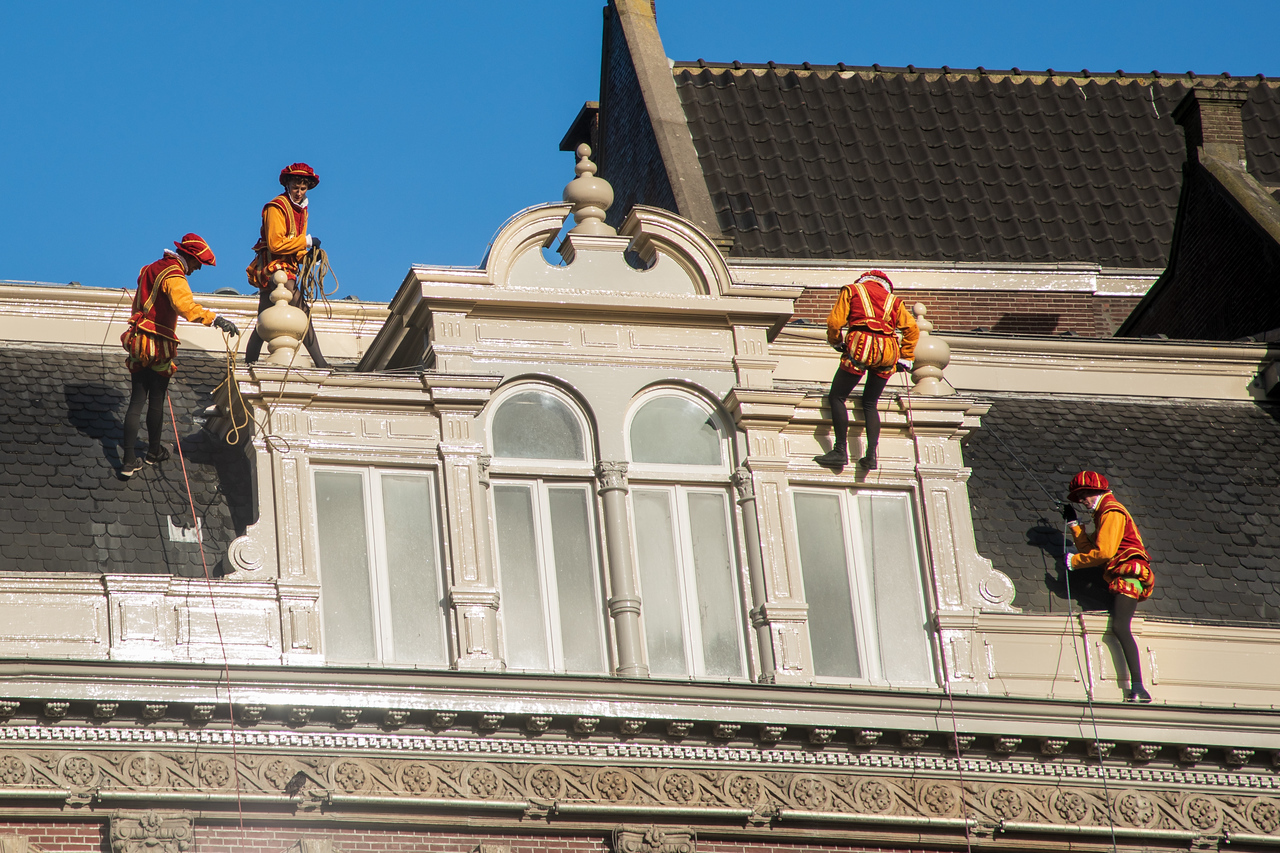 The Zwarte Piet helpers are there to assist Sinterklaas. The Zwarte Piet wear colourful 16th-century clothes, with a ruff lace collar and a large cap. They carry a bag laden with sweets and run around, hurling candy into the crowds for the children (and me!). This tradition supposedly originates from the story of Saint Nicholas rescuing three young girls from a life of prostitution by throwing coins through their window at nighttime to pay for their dowries!

Traditionally, the Zwarte Piet would carry a chimney sweep’s broom made from willow branches which were used to spank naughty children. In some of the old songs about Sinterklaas, it mentions taking the naughty children back to Spain in a Zwarte Piet’s bag.

How the Story of Sinterklaas and Black Pete Has Evolved

Over the years, new stories of the Zwarte Piet have been added, and today the helpers have developed from being rather unintelligent to a useful aide to the absent-minded Sinterklaas.

These days with the arrival of Sinterklaas being televised, Sinterklaas has a Zwarte Piet for every function. There is a head Piet (Hoofdpiet), a navigation Piet (Wegwijspiet) who drives the steamboat from Spain to the Netherlands, a gift-wrapping Piet (Pakjespiet) who wraps the presents, and our favourite, the acrobatic Piet to climb roofs, chimneys and abseil the buildings.

Traditionally Zwart Piet is portrayed with a black face because he is a Moor from Spain. Nowadays, some people prefer to say that his face is smudged with soot because he has to climb down chimneys to deliver presents on behalf of Sinterklaas. 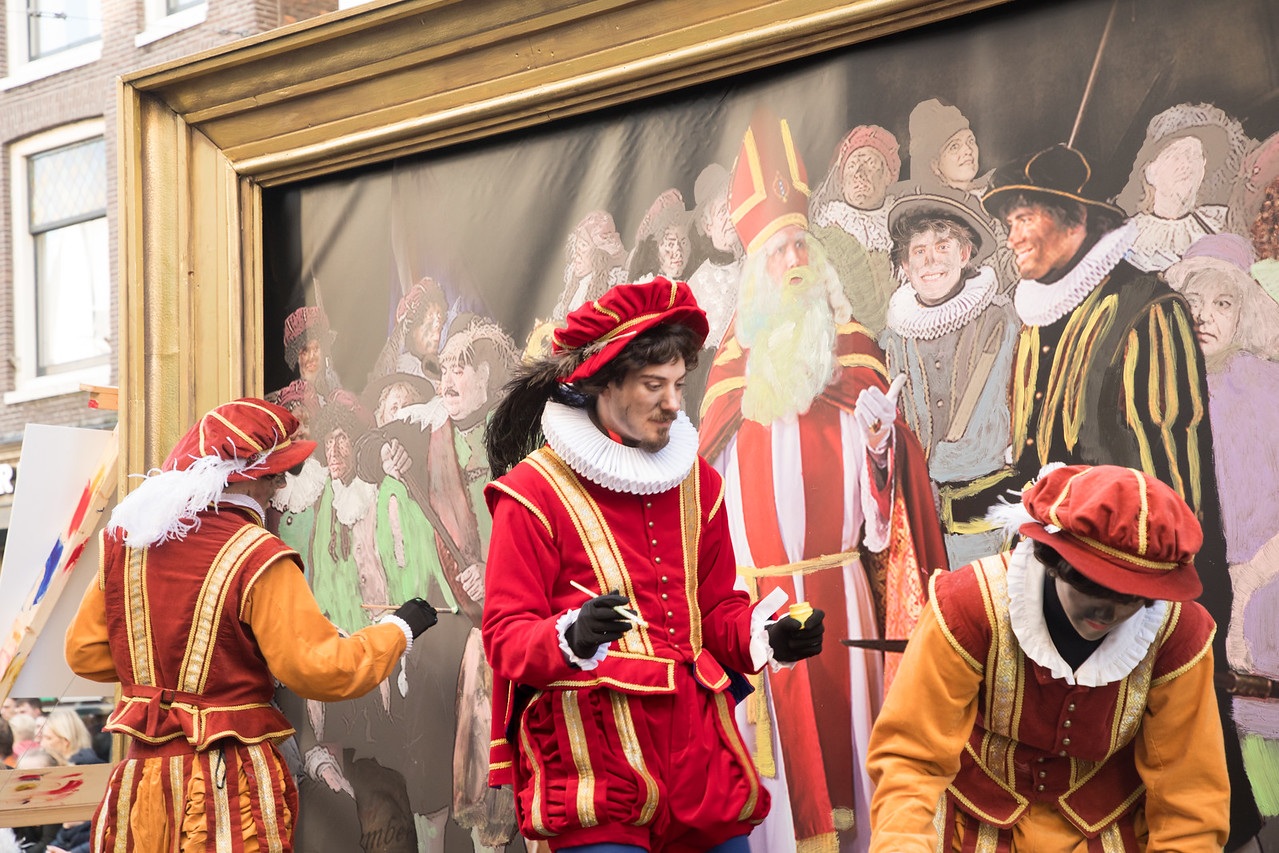 Zwart Piets Painting on the Streets of Amsterdam

In past years, there have been protests and debates as to whether depicting the Zwarte Piet with a black face is racist. Today, many Dutch cities and TV channels only show the Zwarte Piet (Black Pete) characters with soot marks on the face rather than the full blackface – the so-called chimney Petes. 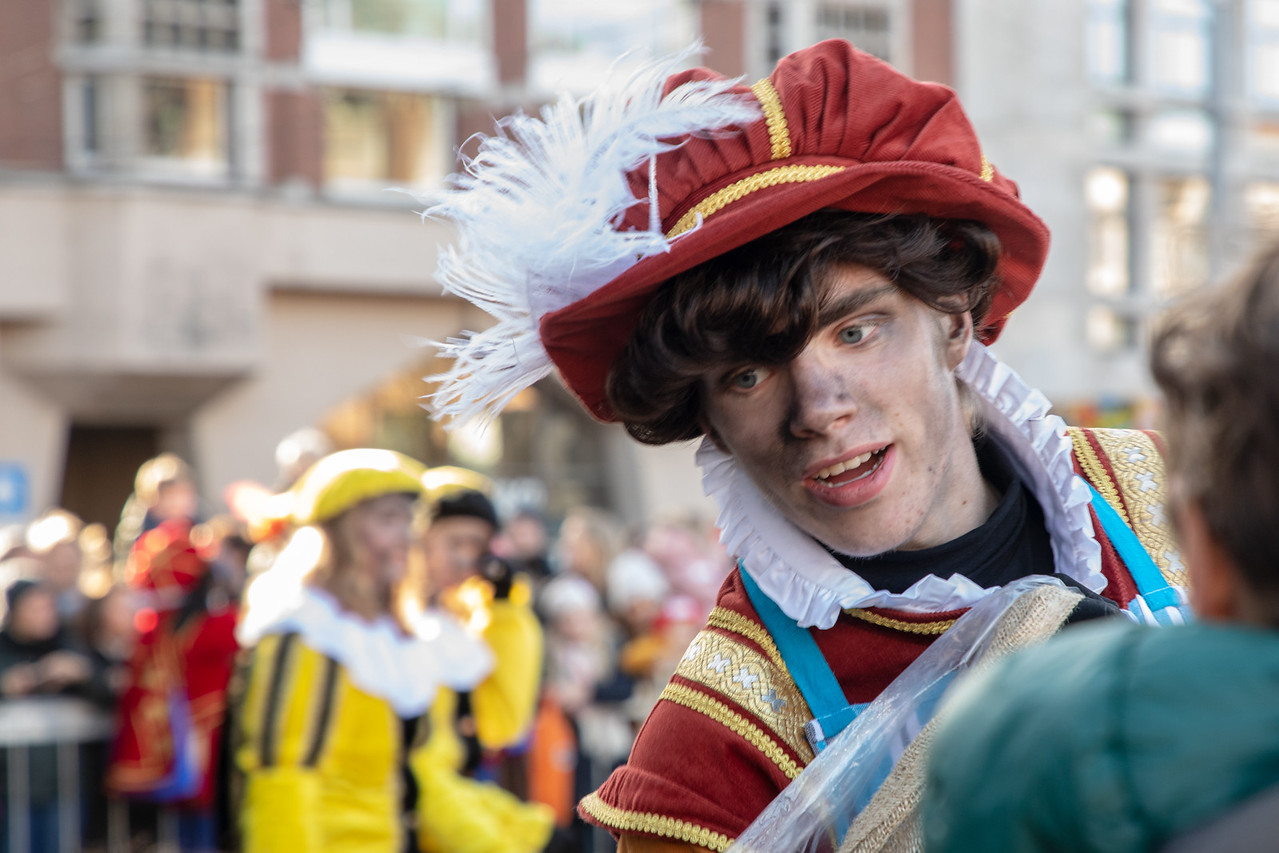 The actual official holiday in the Netherlands is the fifth of December. This is the day when gifts are exchanged. Children sing songs to Sinterklaas as loudly as they can, until there’s a knock at the door. If they have been good kids, there will be a bag of goodies just outside the door!

Have you seen this event? Tell us all about your experience in the comments below, we would love to hear about it!