How To Visit Bethlehem

We visited Bethlehem in late November for the lighting of the Christmas tree. I was hoping to sing O Little Town Of Bethlehem under the tree and feel all Christmassy. But unfortunately, the pre entertainment went on so long and the last bus left at 19:30, so we ended up missing seeing the lights being switched on. Although, admittedly, what we saw of the show was quite fun and exciting to see.

Bethlehem is located in the West Bank, in the Palestinian Territories. Just ten kilometres from Jerusalem, there are so many things to see and do in Bethlehem, it makes for a perfect side trip or a place to stay. If we hadn’t been house sitting in East Jerusalem, we would definitely have extended our visit to Bethlehem for a night or two.

There are many tours from Jerusalem that visit Bethlehem and see Banksy’s infamous street art, but it’s easy enough to discover most of them by yourself.

If arriving by bus, once you disembark, turn right and continue along Hebron Road for around ten minutes. Just opposite the Jacir Palace Hotel is a Banksy shop. Inside the shop behind glass is Banksy’s famous artwork – the girl frisking the soldier.

Continue along the road for a few more minutes towards the depressing-looking separation wall near the Kando Gas station. Here you’ll find loads of street art, not just by Banksy but many other artists. Note that the Banksy donkey art is a fake!

To see Banksy’s Armoured Dove, continue walking on Hebron Road for a few more minutes, and you’ll find it just outside the Palestinian Heritage Centre.

The Separation Wall or the Israeli West Bank barrier or wall is a separation barrier in the West Bank. Israel calls the wall a security barrier against terrorism, while Palestinians call the wall apartheid or a racial segregation wall. 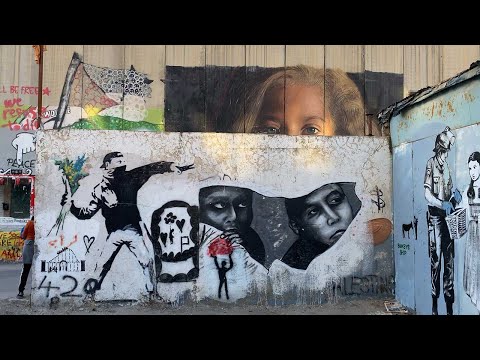 Along the Separation Wall, there are a series of posters about Palestinian life. Fascinating, depressing and thought-provoking!

If you want to add your mark to the wall, you can visit the Wall*Mart located next to the Walled Off Hotel. As their site states, it’s ‘Your one-stop shop for decorating the wall!’

The Walled-Off Hotel next door is a great place to stop for lunch and drinks, and a mosey around inside. Try the Walled Off salad!

Church of the Nativity

From the Separation Wall, it’s a 25-minute walk to the old city. Not surprisingly and especially being so close to Christmas when we visited, there was a long queue to see the birthplace of Jesus. The line is on the right side of the church, but stay to the left and smile sweetly at the guard and he may let you sneak in another way. Well, that worked for us anyway!

Alternatively, some guys hanging around outside the church were happy to show you a short cut to the manger for a ‘fee’. Would Jesus have approved?

To enter the church you will need to stoop as the only entrance is just 1.2 metres high. The previous access to Bethlehem’s Church of the Nativity was lowered around 1500AD to prevent looters from driving their carts inside.

The basilica you see today is the oldest complete church in the Christian world. It was built in the 6th century by the emperor Justinian and replaced the original church of Constantine the Great. The church stands over the cave that is revered as Christ’s birthplace.

Opening Hours For The Church Of The Nativity

Note: On Sunday mornings, the church is open for Holy Mass only.

Grotto Of The Nativity

Not exactly the Christmas-card image that we had expected. The place of Jesus’ birth is in a dimly-lit rock cave. On the marble floor, there’s a 14-point silver star that bears the words “Hic de Virgine Maria Jesus Christus natus est” (Here Jesus Christ was born to the Virgin Mary).

The combination of crowds of Christian pilgrims praying and overcome with emotion, tourists fighting to take a photo, and guards shouting for you to hurry up and move along, the experience is probably not going to be as humbling and moving as you may have hoped!

Opening Hours For The Grotto Of The Nativity

The grotto is closed on Sunday mornings but reopens in the afternoon.

Chapel Of The Milk Grotto

Just a few minutes walk from the Church of the Nativity is the slightly more serene Chapel Of The Milk Grotto.

According to tradition, Mary and Joseph stopped in this cave on their way to Egypt, while fleeing from Herod’s soldiers. As Mary nursed baby Jesus, a drop of her milk fell upon the stone, and it turned white.

Observing men and women lining up to kiss a picture of Mary’s breast seemed slightly weird and somewhat inappropriate.

Many new mothers and women who are trying to conceive, visit the Chapel of the Milk Grotto. They believe that by mixing the soft white chalk into their food and praying to Our Lady of the Milk, it will increase the quantity of their breast milk or enable them to become pregnant.

Opening Hours For The Chapel Of The Milk Grotto

Manger Square is the main square, set in the heart of Bethlehem. Around the square are the Church of the Nativity, the Mosque of Omar, the Palestinian Peace Center, numerous souvenir shops, and restaurants. All the streets that lead to Manger Square relate to the Christian faith, such as Nativity Street and Star Street.

We enjoyed a delicious barbecued chicken at the Al Sufara Restaurant located just off Manger Square. There were several restaurants close to the main square, but this was a real hole-in-the-wall venue. Inexpensive and friendly staff, what more could you ask for?

Where To Buy Souvenirs in Bethlehem?

There are loads of touristy shops near the Nativity Church and around Manger Square, but for unique, good value Palestinian gifts head to the Wall Graffiti Shop near the Separation Wall. It is formerly known as the Banksy Shop. It’s a cool shop with great value t-shirts and mugs etc., and no annoying pressure to buy!

Do I Need To Carry My Passport When I Visit Bethlehem?

Yes, some passports were checked as we passed through the security border as we exited Bethlehem, so it’s a good idea to carry it with you at all times.

What Currency Is Used In Bethlehem?

The Israeli Shekel, the US$ and Euro are accepted in Bethlehem. Some restaurants and souvenir shops will also accept major credit cards. Prices are often quoted in US$, but you can pay with shekels.

How Far Is It To Bethlehem From Jerusalem?

Bethlehem is only ten kilometres from Jerusalem, but the journey time can take more than an hour because of traffic and border checks.

Map From Jerusalem to Bethlehem

How To Get To Bethlehem From Jerusalem

To get to Bethlehem from Jerusalem take Bus 231 from the main Arab Bus Terminal locates near Damascus Gate. The buses run every 20 minutes and cost 7NIS. Payment for bus tickets is cash only. If you’ve been travelling around Israel using the Rav-Kav card, it won’t work on the Arab buses.

The last bus back from Bethelem to Jerusalem leaves at 19:30 at the same point as where you arrived.

If you don’t want to travel independently, there are plenty of tours available from Jerusalem or Tel Aviv that visit Bethlehem.

Israeli taxi drivers are not allowed to enter Palestinian Authorities, so you can’t just jump in a taxi from Jerusalem. It’s possible to get as far as the border, but then you’ll need to arrange transportation from there.

Is It Safe To Visit Bethlehem?

We felt perfectly safe when we visited Bethlehem in November. Many people associate Palestine with danger but, don’t forget that the Palestinian Territories are made up the West Bank and the Gaza Strip. Most clashes occur in the Gaza Strip which is about 100 km south of Bethlehem.

However, situations do change, so it’s always a good idea to exercise caution. Check on local Facebook groups and travel advisories to keep updated with the latest news regarding security.

Have you been to Bethlehem? Tell us about it in the comments below.

For Posts On Nearby Jerusalem, Take A Look At These

Top Things To Do In Jerusalem

Day Trip From Jerusalem To The Masada

Temple Mount and the Western Wall of Jerusalem

Walking the Via Dolorosa

Mount of Olives Self Guided Tour

Our Favourite Cities In the World

Our Most Memorable Meals From Around The World

Disclaimer: This article may contain affiliate links, where I receive a small commission but don’t worry, there’s no extra cost to you.